Ninety-fiveÂ years ago today, in 1920, it would have practically been the same, sans the cell phones. So it’s particularly disturbing how easy it is to imagine the noontime scene on September 16, 1920. In fact, most of the surroundings — the Stock Exchange, the Sub-Treasury building (today’s Federal Hall), and most importantly J.P. Morgan’s headquarters on 23 Wall Street — are still very much active.

An unidentified man led a horse and carriage down the congested street, fighting to get past crowds, until it rested at the corner about 100 feet east of Broad. As the Trinity Church bells rang, the man dropped the reins and fled, never to be seen again.

One minute later, the wagon exploded with 100 pounds of dynamite, eradicating everything in its sphere, then sending dozens of iron slugs through the air to create a horrific scene of carnage.

The best way to really tell this story is to quote a few contemporary accounts from the New York newspapers. NOTE: Some of the accounts are quite graphic.

A 22-year-old woman named Ella Parry survived and was interviewed by the Evening World:

“The glass of our windows fell into the office and the ceiling fell all about us. Where I had just been sitting was covered with heavy plaster. I did not wait to get my hat, but with others rushed into the street.

There were not less than a dozen dead persons on the sidewalk in front of tour building and the Sub-Treasury. Some of them had their faces almost completely blown off and their clothing had either been blown from their bodies or burned off. The police threw sheets over the bodies as fast as they could get them.”

From a lawyer named Daniel Nugent who was standing near the site of the explosion:

“I was just about toÂ enter the Morgan Building when the concussion knocked me down on the sidewalk. I arose after I had collected my thoughts and saw broken glass covering the street. All about me men and women were lying bleeding. Above fifty feet down Wall Street there was an auto in a mass of flames. Across the street from it there was a shattered wagon and a horse lying dead. I saw several men cut almost in half from the large plate glass which fell from the building.”

From the New York Tribune:

“Not a sound pane of glass remained in the Morgan Building. Â Screens of copper mesh which were set inside the windows were bent and twisted but had fulfilled their mission of protecting those within. Â Fragments of the glass dome above the main office lay on the floor, and one of these, or some similar bit of falling debris, is beloved to be responsible for the single death that occurred there. Â  The streets were covered with broken glass, some of it finely powdered, like sugar.

The heroic statue of Washington on the steps of the Sub-Treasury was not so much as scratched by the explosion, and stood firmly, with hand outstretched in a quelling gesture.” 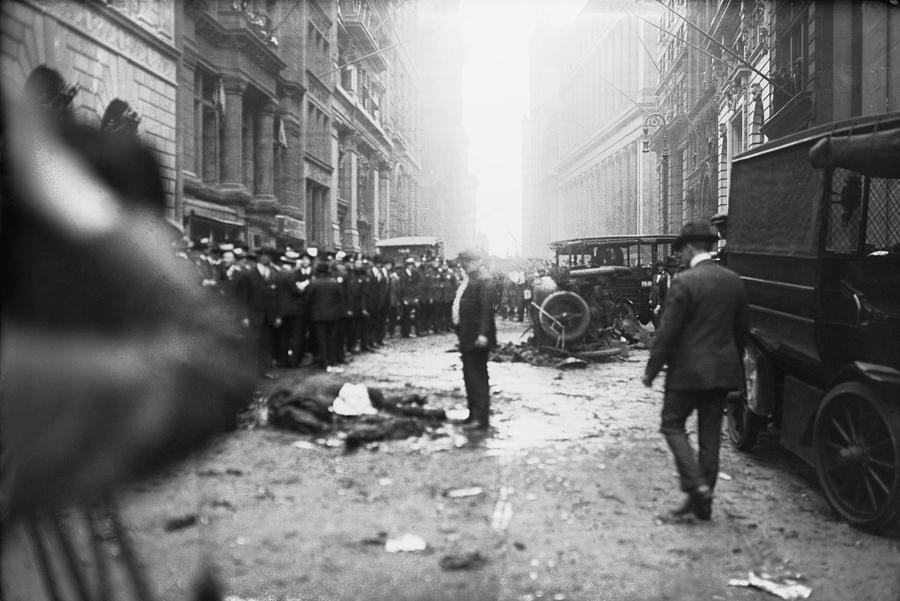 One unusual story of bravery emerged the following day. A teenage office boy named James Saul grabbed a random automobile and began driving injured victims to the local hospital. Fearing the owner of the automobile was among the injured, he then drove the car to a police station.

By the end of the day, 38 people would be dead from the attack, many while sitting at their desks. Â And over 400 more would be injured.

According to the New York Times: “The scene at the Morgue last night [located] resembled in many respects the night of the [General] Slocum disaster.”

Below: The late edition of the Brooklyn Daily Eagle: “A mysterious explosion, disastrous in its effect, occurred at noon today on Wall Street, killing more than a score of persons and injuring hundreds.” 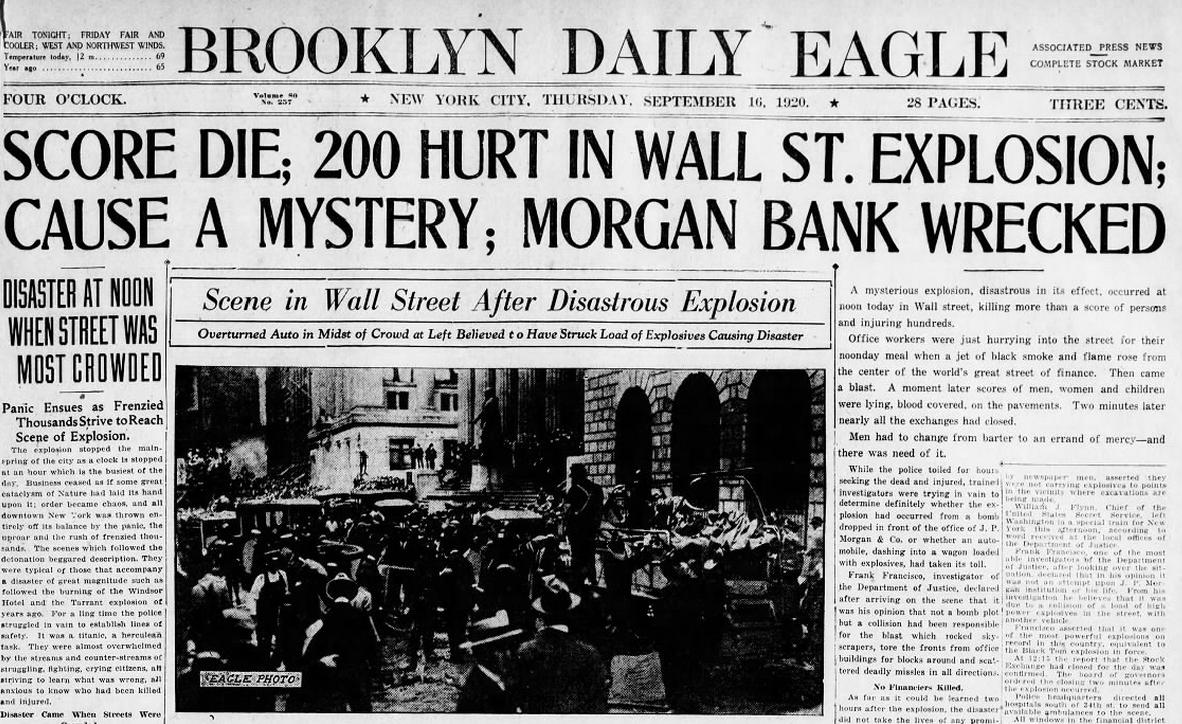 Following the attack, the Madison Avenue mansion of J.P. Morgan (site of the Morgan Library and Museum) was heavily guarded. Morgan himself was actually in England, enjoying a relaxing vacation.

Believe it or not, evidence of this attack can easily be seen from the street today. Â The banking mogulÂ famously rejected repairs of his bank, preferring to leave the dents and pockmarks on the side of his building in a sign of defiance. With a little morbid imagination and some amateur CSI work, one can probably trace the trajectory of wall’s injuries to the very spot where the poor horse and wagon exploded.

Below: Crowds gather to witness the destruction. 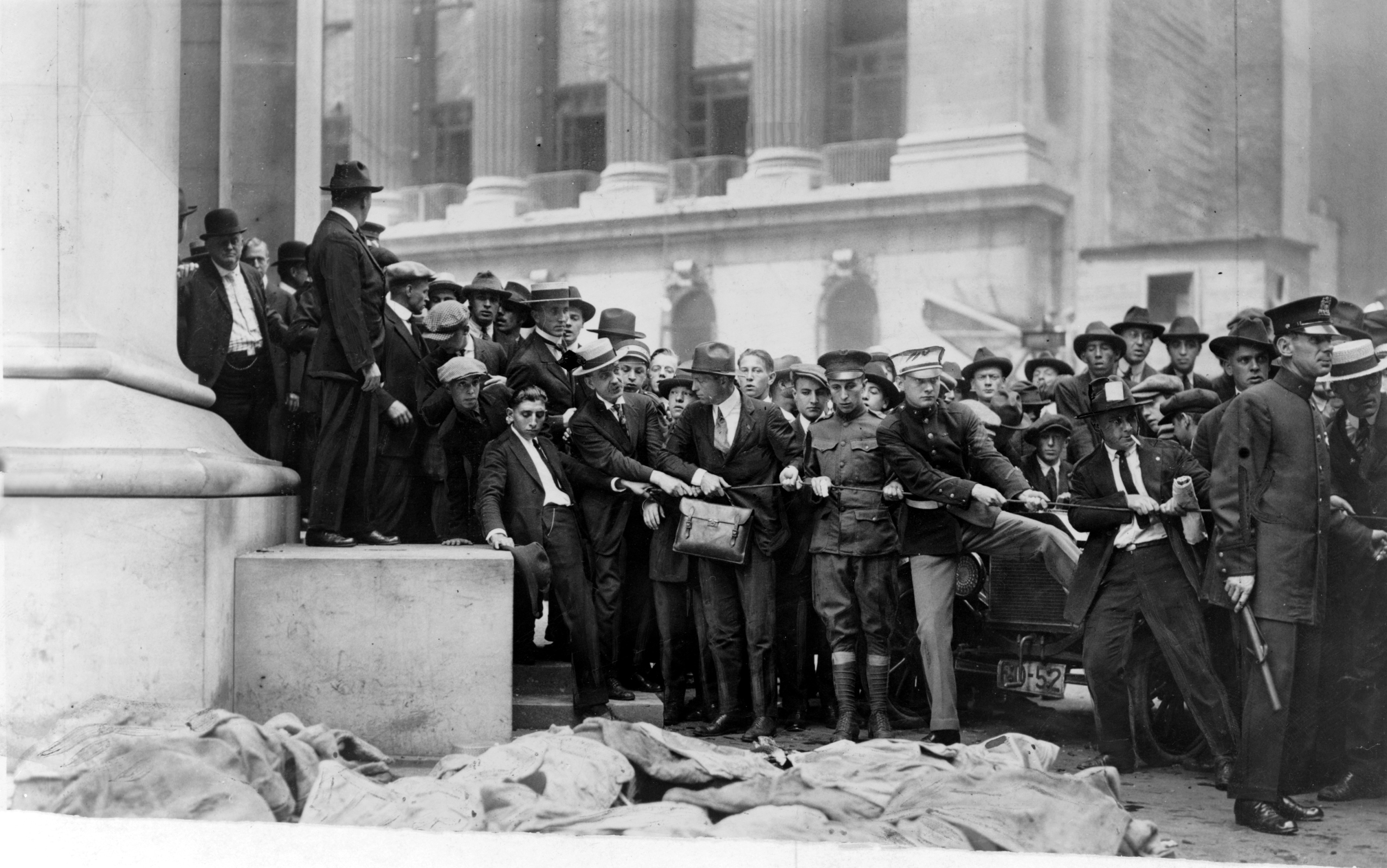 Despite a federal investigation which led to dozens of arrests, in fact the culprits were never caught. Â Largely assumed to be Italian anarchists, any evidence was unfortunately lost when, in an effort to appear unfazed, the city cleaned the street and kept Wall Street open for business the next day, even seeing a rally of thousands pour into the street that Friday. 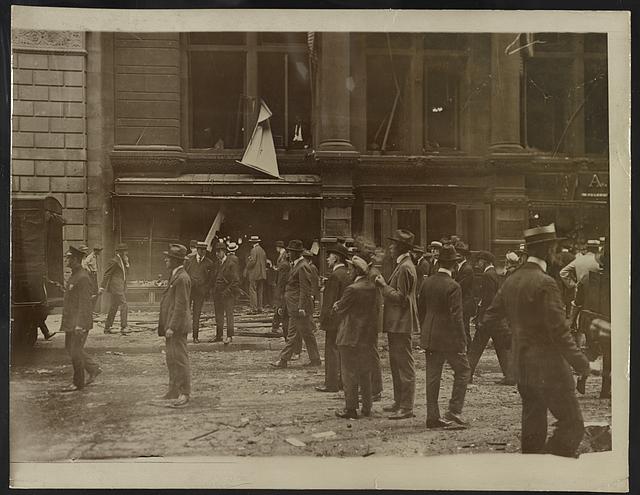