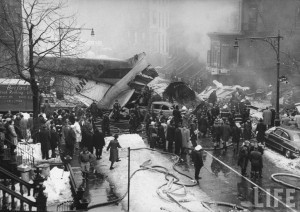 One of the strangest and most tragic accidents in New York history occurred 49 years ago today when two planes, one United Airlines, the other TWA, collided in midair above New Dorp, Staten Island. The United Airlines flight plummeted to Brooklyn, in the intersection of 7th Avenue and Sterling Place in Park Slope. A total of 134 people from the planes and six on the ground were killed.

Miraculously, a young passenger from Illinois, Stephen Baltz, flying unaccompanied aboard the United flight, actually survived the crash but died of his injuries the following morning at nearby New York Methodist Hospital, Seventh Avenue and Fifth Street. Today there’s a plaque there that somewhat macabrely incorporates pocket change from Baltz’ pocket into it. Stephen would have been 60 years old this year. 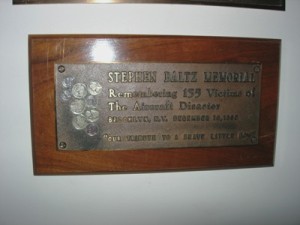 Wreckage from the TWA flight landed at Miller Field in Staten Island (seen below): 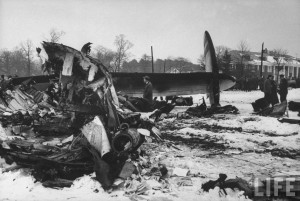 Nighttime at the Park Slope wreckage site. Physical proof of the tragedy can still visible on some of the buildings around Sterling. 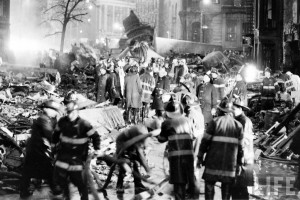 Location of the Brooklyn crash and what it looks like today:

I’m glad you guys marked the day.
My dad was at school down the block when it happened and along with the other boy scouts did what they could to help. He recalls seeing bodies being brought into what was then the bowling alley (approx. where the pool hall is right off Flatbush).

I grew up in Fort Greene and would walk by the site practically every day returning from work on the avenue.

I’m Owen, by the way. Love the podcast. Keep it up, lads.

(although I’d love a more thorough take on McSorley’s sometime – a small nit to pick but there it is).

I was there.
Volunteers gathered at a church in the middle of it all.
The tail of the plane, was in front. It was so big..
I walked through the wreckage handing out hot chocolate to the firemen, police, workers.
I was there at night.Flood lights were on. As I remember it was two maybe three nights.

As I remember a local garage as used as a morgue..
Raking through the debris someone found a ring. We gathered around..It was still on the owners finger..

As horrible as it was.. Miracle, Luck, it missed, by a few blocks,
Methodist Hospital, Manual Training High School and a grade school.

This incident is burned in my memory. Young Stephen and I were the same age back then and I remember everyone praying that he might recover.
My brother watched the plane crash from his clasroom window one block away, the pilot narrowly missing his school.
Every so often when I am assigned to Methodist, I take a look at that plaque and think of Stephen Baltz.
Here’s to you Stephen.

Indeed. I was attacked by a dog when I was six and after getting patched up at Methodist my dad showed me the memorial to Stephen and explained what had happened. Stuck with me.

I was only 8 years-old at the time , but I remember that Friday
my Uncle Fred and his friend Charlie Kenewer saw the TWA
Lockheed Super Constilllation go down in Miller Field in New Dorp. My Uncle Fred was helping Charlie Kenewer move
furniture at Huss Furniture Store on Hylan Boulevard when
he witnessed the plane crash.