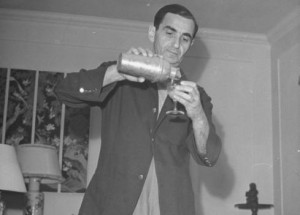 HOW NEW YORK SAVED CHRISTMAS Throughout the month I’ll spotlight several events in New York history that actually helped establish the standard Christmas traditions many Americans celebrate today. Not just New York-centric events like the Rockefeller Christmas Tree or the Rockettes, but actual components of the holiday festivities that are practiced in people’s homes today.

Irving Berlin, the most prolific of Tin Pan Alley music men, composed “White Christmas” in 1937 during a trip to California. Dwell upon that statement for a moment. Berlin, the product of Russian Jewish immigrants, wrote one of the most beloved Christmas classics in an area of the world almost entirely devoid of white Christmases.

Although he wrote the song over 25 years after the ‘real’ Tin Pan Alley on 28th Street dissolved into a loose assemblage of businesses throughout midtown, Berlin did get his start on that very street, learning the trade under the employ of Harry von Tilzer’s publishing company and cranking out his own tunes; his first song, written in 1907 at age 19, was the Marie of Sunny Italy. Because of this connection, “White Christmas” is often considered the “most famous, most-recorded Tin Pan Alley song of all time.”

Irving arrived in Ellis Island in 1893 and his family settled first with a relative on Monroe Street, then later on the third floor of a tenement at 330 Cherry Street, just a few steps away from Corlears Hook.

Although new ethnic groups in New York naturally cluster together at this time, Cherry Street was considered one of the most dense blocks in the city, and it would have been impossible to avoid the foreign traditions of others, especially if you were a curious child like Irving. His experiences of Christmas were almost entirely based on Irish friends and neighbors who lived on this ultra-crowded block. The traditions would have had little religious context for him. Although it’s probably overstating to say that his displacement had a hand in the secular nature of ‘White Christmas’, Irving would have had only non-religious experiences upon which to inspire the song’s overwhelming glow of nostalgia.

Or Philip Roth famously says of Irving Berlin’s ‘Easter Parade’ and ‘White Christmas.’ in his classic Operation Shylock: “The two holidays that celebrate the divinity of Christ — the divinity that’s the very heart of the Jewish rejection of Christianity — and what does Irving Berlin brilliantly do? He de-Christs them both! Easter he turns into a fashion show and Christmas into a holiday about snow.”

“White Christmas,” debuted in the 1942 film Holiday Inn and within a couple years became the melancholy holiday anthem for a country in the middle of World War II. More importantly, it kicked off a flurry of secular Christmas classics, as songwriters rushed to find a suitable successor. “Iâ€™ll Be Home for Christmas” debuts a year later, with “Have Yourself a Merry Little Christmas” coming a year after that.

1 reply on “‘White Christmas’ roots in the Lower East Side”

Hey guys, I’m your fan from the school of Journalism in Columbia MO…I met one of your former interns there! I was bragging about your website to a lady and he over heard me and we talked about you guys…sweet.

I have a suggestion of a topic…how about the Leonard Jerome family of New York, he had three daughters one of them was Jennie Jerome whom grew up to be the wife of of Lord Churchill and the mother of Winston Churchill. I just read a book about her but would love to hear more about the family. Leo Jerome had expensive tastes but not always solid income. But would love to hear your thoughts.
I’m C Thomas. I follow you on facebook.
I have a blog http://www.beadnfun.wordpress.com
please visit.