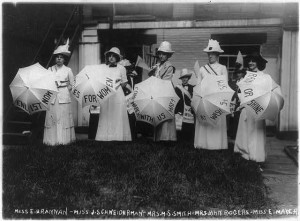 All The Single Ladies: though I believe the women above are actually garbed for a suffrage march in 1912, I just couldn’t resist this photo (Courtesy LOC, click pic for detail)

It seems so bizarre now that it feels funny writing it — one hundred years ago, women didn’t have the right to vote in this country. Actually it’s worse than that –it wasn’t until 1920 that the 19th Amendment was ratified — but the 100-year mark is significant as it marks the first significant public march devoted to suffrage in New York City.

New York state is of course the epicenter for the women’s rights movement in the 19th Century. Liberty Party presidential candidate Gerrit Smith gave a heralded speech in Buffalo in 1848 urging “universal suffrage.” The convention in the small town of Seneca Fall, NY, later that year united the country’s great civil rights and proto-feminist leaders for a bevy of women’s causes. Susan B Anthony and Elizabeth Cady Stanton both lived in New York City at one time, and the National American Woman Suffrage Association formed here in 1900 with Carrie Chapman Catt as president.

But the tipping point for suffrage seems to have begun in 1910 at the peak of a so-called ‘suffrage renaissance’, nationally with the first state referendums (yes to suffrage in Washington, no in Oregan, California would pass it in 1912, Ohio would defeat it) and locally with the first large-scale women’s suffrage march through the streets of Manhattan on May 21, 1910.*

Like later social causes, early suffrage organizations tended to be passionate, but fragmented. The May 21st march was actually organized by the newer Women’s Political Union (formerly called the Equality League of Self Supporting Women!), but its participants drew from a wide range of supporters — activists, working women, socialites, students.

Led by Union president Harriot Stanton Blatch, the daughter of Elizabeth Cady Stanton, the parade of almost 400 women might have been dwarfed by other processions, but the sight of such a large cluster of loud, boistrous (and unaccompanied!) women, many of great wealth, wearing ‘Votes For Women’ sashes, riding in automobiles or holding banners such as “New York State Denies the Vote to Idiots, Lunatics, Criminals, and Women” and all of them dressed in white — all of this clearly piqued the curiousity of New Yorkers.

Parades were even more powerful 100 years ago at catapulting your cause into the mainstream. According to journalism professor Linda Lumsden, “Women’s public agitation for the vote–in the form of parades, pageants, and pickets–helped them elevate their cause to a national level.”

Within seven years, in 1917 New York state would grant women the right to vote. The country would ratify the new amendment to the Constitution three years later, in time for the presidential election of Warren G. Harding.

*It appears that minor suffrage marches — mostly activists, relegated to less than 100 marchers — occurred in 1908 and possibly even 1905. Of course much larger worker’s rights marches would sometimes include people marching for the suffrage cause as well.

Cool. I really like that quote: “New York State denies the vote to criminals, lunatics, idiots & women!” Send the message!