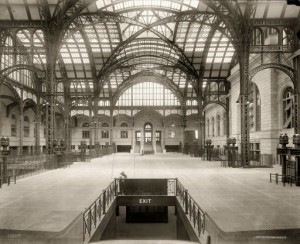 Over the next few posts, I’m turning back to exactly one hundred years ago, to contrast the beginning of 2010 with the events of 1910. New York City was in the midst of its Gilded Age, at the beginning of the skyscraper era, more confident as a worldwide center of finance, media and power even as it was still learning to provide for a massive, increasingly multi-cultural population.

One of New York City’s most important historical events of 1910 was the opening of old Pennsylvania Station, the hallmark of Beaux-Arts grandeur and Manhattan’s most impressive building. However its impact would be felt more importantly in a borough it wasn’t even in: Queens.

Queens was brought into New York City with consolidation of the five boroughs in 1898, an assemblage of small towns, village and farmland once united only by county designation. There was certainly no Queens identity, and the population was sparse, the second-least populated after Staten Island. Population numbers in 1900 place 152,999 residents of the borough versus 1,850,093 in Manhattan (or just 8.3% of Manhattan’s total). Today, Queens has a greater population than Manhattan.

The slow beginning of that shift started with two neatly parallel events from 1909 and 1910. First was the opening of the Queensboro Bridge on March 30, 1909. Over a year later came something arguably more significant — the opening of the Penn Station tunnels on September 8, 1910, connecting with the Long Island Railroad, now owned by Penn Central Railroad. Residents of Queens could now commute directly into the city, while the borough became an option for Manhattan residents who wanted to escape the city.

With convenient passage between an over-populated island and its new, sparsely populated sister borough assured by 1910, it’s no surprise that the decade has been referred to Queens’ ‘construction period’, becoming the fastest growing borough of the decade.

Other events in Queens history from the year 1910:

— Presaging the population growth, the Neponsit Realty Company bought a stretch of land on the Rockaway Peninsula in January 1910 and formed the wealthy outpost neighborhood of Neponsit. Today it’s still row upon row of large homes, most dating from the 1920s and 30s.

— In 1910, the descendants of Albon P. Man, whose lavish estate dominated central Queens during the 19th century, began parceling out pieces of the estate to small landowners and developers, having decided to call the area Kew Gardens after London’s botanical garden complex.

As for Penn Station, regularly timed train service was finally initiated in November 27th of that year. According to Jill Jonnes, “By nine o’clock, excited New Yorkers, bundled up against intimations of snow or freezing rain, were converging upon the station’s Doric colonnades,” creating a mob scene on the new platforms. The hottest ticket in town that year was, strangely enough, a ticket outta town.

Penn Station was the most significant but hardly the only opening of 1910. The Madison Avenue Bridge, connecting Manhattan with the Bronx, opens that year, as do the Ritz-Carlton Hotel at 46th and Madison, and Liberty Tower at 55 Liberty Street. Also this year, work begins on the Woolworth Building.