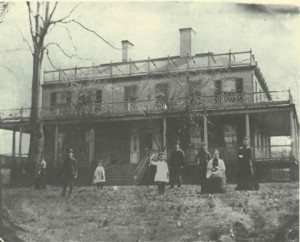 Above is the only photograph I can find of Gracie Mansion that features members of both the Wheaton and the Quackenbush families, who took over the manor in the late 19th century. It’s from a book which I had to scan, and the original is courtesy New York Historical Society, so I apologize for the quality of the image. But even slightly obscured, it’s an amazing picture.

Taken in 1890, the house doesn’t look like it’s in such a bad state. Neither Lambert S. Quackenbush nor (Alice) Hermione Quackenbush appear in this photo, but other members of the Wheaton and Quackenbush clan are here. The girl standing next to the seated woman is Amalie Hermoine Quackenbush, daughter of Lambert and Hermione.

I find the strange composition of this picture very compelling, how they’re spread out over the front yard of the mansion (which was, by tradition, called Gracie or Gracie’s Mansion, even at this time), how the young girl in the foreground holds a hoop, how another daughter of Lambert’s, Jenny, stands far in the background by a tree.

Image from ‘New York City’s Gracie Mansion: A History of the Mayor’s House’ by Mary Black

Yep That’s my great grandmother with the hula hoop.
Thanks for the post

Nice piece of history with the ancestors there. My grandmother, Adrianna, was not in photo as she was born in November 1889. I do recall some of her older sisters who were my great aunts. Brian Magee, who was your grandmother ?My brother’s middle name is Wheaton. I have 2 daughters with family names Jennifer and and Susan Adrianna

My grandmother, adrianna quackenbush Acher, told me her oldest sister, Millie, carved her name in a widow pane to see if the diamond ring was a real engagement ring. It is in a pane by a stairs that is still there. Upset about the current mayor and wife that reside there now.