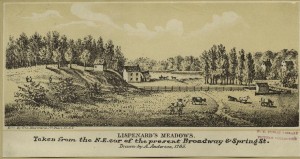 Spring Street and Broadway in 1785, 30 years before the events of the article below. Illustration courtesy NYPL digital images

While researching the Gracie Mansion podcast, I found mention of a street gang by the name of the Spring Street Fencibles, or simply, the Spring Streeters. Obviously, the streets of New York have been crawling with gang activity since the 19th century. But what makes this shadowy gang particularly interesting to me is the date of their only documented crime — 1825, making them one of the earliest mentioned organized gangs in the press. Their foul indiscretion? The murder of a well-known city merchant, an event that may have greatly affected the namesake of Gracie Mansion, Archibald Gracie — depending on which source you believe.

It is not known whether the Spring Streeters were truly organized in same way as later gangs like the Roach Guards and the Dead Rabbits; nor is it clear that their members were strictly Irish-born, as they commonly were in those days. In prior histories, they are loosely clumped with another group called the Grand Streeters. Spring Street runs parallel a couple blocks north of Grand Street, and it’s possible the two gangs were rivals or even one and the same gang.

The only crime by the the Spring Street Fencibles that I could find on record is the horrible slaying that occurred the early morning of June 3, 1825. The young drunken rowdies accosted a private carriage at Broadway and Art Street (or today’s Astor Place). A group of gentlemen accompanying the carriage uptown confronted the gang, and a ‘scuffle’ ensued. One of the gentlemen, one Mr. Lambert, was punched in the stomach and later died of his injuries. The gang members were rounded up and carted off to prison.

The confusion as to the victim’s name underscores one of the problems I often find in researching the early days of New York, when newspapers were not as concerned with exacting and factual detail. One key source, on the history of Gracie Mansion, clearly lists the victim as David Lambert, an associate of Gracie’s who put up the family in one of his townhouses when they fell on hard times. Other sources, however, list the victim’s name as Henry Lambert, of which nothing is known.

An old merchants guide of New York clearly links David as the victim of the crime, “up by Sailors Snug Harbor (near where Tenth Street is now).” The original land for Sailors Snug Harbor sat where today’s Washington Square Park is, which would have been just west of the reported violence. (Snug Harbor would move to its present location in Staten Island in 1833.)

Whatever the identity of the unfortunate man who died 185 years ago in the area of Astor Place, his demise also marked the end for this sorry group of thugs, locked up in prison for either seven or ten years — again, depending on which source you trust*.

Had this group of ruffians come along before 1807, they might have been known as the Brannon Street Fencibles, for that was the original name of Spring Street. The road was named for a Mr. Brannon the keeper of a “noted public house and a beautifully-laid-out garden,” situated nearby an actual spring of water. After 1807, the name switched to Spring Street.

*For the podcast, I clearly went with it being David.

3 replies on “Who are the Spring Street Fencibles?”

This is a great read and an interesting insight on a different historical side of New York. I think you might also find the book Amazing People of New York of interest, http://www.amazingpeopleclub.com/bioview/amazing-people-new-york.html
Keep up the great work!

Were there that many Irish gangs in NYC in 1815? The influx of Irish occurred after 1846 due to the failure of the potato crop and widespread famine.

The Fencibles could likely be native Americans, in the mold of Butcher Bill, who were there prior to the Irish migration, no?

….According to the trial documents, the convicted were Moses Parker, James Buckland, Joseph Wade, William Walker, Cornelios Holly, Abraham Potts, Thomas Rea and Noah Doremus. Moses was my great, great grandfather. It appears we came from indentured servants on estates north of NYC. So you could call this “gang” native American…However, in a quirk of fate, his son married a girl born in Ireland.