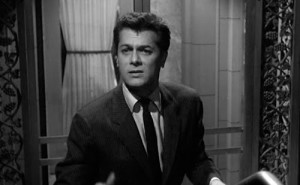 Curtis, as the smarmy Sidney Falco, in ‘Sweet Smell of Success’

“Another way I coped was by being rough, rowdy, and athletic. Not on a basketball court or a football field; on the streets of New York. I would climb the trestles of the el train like I was Tarzan. I would jump from the roof of one apartment building to another, sometimes downhill. One time I misjudged and bounced off the side of another building. I cracked a few ribs.

But my favorite stunt was really dangerous. I call it trolley hitching. I’d start on the sidewalk under the el. When the trolley was going about twenty miles an hour I’d run next to it, jump up, grab the window bar, and hang on. My timing was split second. I couldn’t afford a mistake.”

— Bronx baby Tony Curtis, who died last night at age 85, on his own scrappy, street-bred machismo, from his book The Making of Some Like It Hot and the Classic American Movie. (Excerpt from here)

The quote in the header is from one is his best works and one of the greatest New York films ever: ‘Sweet Smell of Success’. Here’s one of Curtis’ jazz-soaked scenes from the movie: