From a Statler Hotel advertisement in Life Magazine, dated January 10, 1949. Click in to the illustration to read the text

The offices of Sterling Cooper Draper Pryce were so busy imploding this episode that the characters barely left their offices. Except of course for Roger Sterling, in the midst of a game-changing lie and scrambling to save face. He was supposed to be in Raleigh, NC, convincing his number one client, Lucky Strike, not to leave the agency. But he knows that conversation is futile, so Roger is literally hiding out in Manhattan, “at the Statler.”

You may know this hotel by its first name — which also happens to be its current name: the Hotel Pennsylvania. The grand, columned 22-floor accommodation was built in 1919 across the street from the newly built Pennsylvania Station and also shared the firm of McKim, Mead and White as its architect. 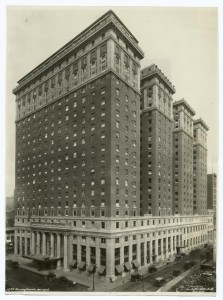 It was a Statler property from the start. Ellsworth Statler, a hotelier from Buffalo, leased the property from the Pennsylvania Railroad and managed it until his death in 1928. His company kept expanding, however, and in 1948 bought the hotel from the financially ailing Penn Railroad and placed their name over the awning. An easy decision: the Statler brand had built itself a sterling reputation by the 1940s.

Its most valuable asset was certainly the elegant Cafe Rouge ballroom which hosted the very finest in Big Band performers, most famously the orchestras of Glenn Miller and Tommy Dorsey.

By the 1950s, the Statler organization merged with the ascendant Hilton chain. And thus the Hotel Statler became the Hotel Statler Hilton until the 1980s. After a couple more managerial changes, it brought back the Hotel Pennsylvania name in the early 1990s.

Despite its longevity and glamorous reputation during the ’30s and ’40s — its phone number is the subject of the classic song “Pennsylvania 6-5000” — the hotel was rarely considered the highest standard of luxury accommodation.

In 2007, the building’s owner Vornado announced it was ripping down the Hotel Pennsylvania and hoisting up a vast tower that would rival the Empire State Building in the midtown skyline.

You would think that demolishing a McKim, Mead and White creation with the word ‘Pennsylvania’ in its name would rankle preservationists, but it seems there is little interest in saving it.

Preserving that hotel, which has become very seedy, is not anywhere near as important as reusing the Farley building and creating a new rail station. And that’s from an interview with the president of the Municipal Art Society.

The battle for Hotel Pennsylvania’s fate is still ongoing. I would recommend checking out Curbed NY’s coverage for the latest.

Incidentally, the Statler name has been immortalized with a Muppet, namely in the crotchety old men who sit in the theater balcony Statler and Waldorf.

3 replies on “‘Mad Men’ notes: The once and future Hotel Pennsylvania”

Oh so not true. The preservationists have been up in arms about it (http://savethehotelpenn.blogspot.com) and have fought a long hard battle against Vornado to stop them from knocking it down.

I attended the first-ever Star Trek convention there, which was in 1971. I believe it was already being called the Statler Hilton at that time.

In the very last scene of ‘Sweet Smell of Success’, Susie Hunsecker looks up the street and you can see these pillars and fascade that looks like the Hotel Pennsylvania. Am I correct? It reminds me of Federal Hall or the NYSE.