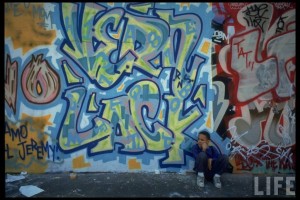 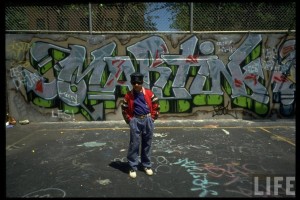 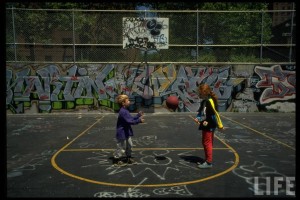 Photos from East Harlem, May 21, 1991, photographs by Ted Thai (courtesy the LIFE archive)

“Graffiti or Wall-scribblings. Despite his withering touch, Time, the destroying angel, has here and there permitted some of the most fragile and evanescent things to remain as silent memorials of long past generations. Not least among these relics of ancient life and thought are the graffiti or wall-scribblings, mostly scratched by some pointed instrument or made with red chalk or charcoal.
They are found upon the colossal mausoleums and temples of Egypt, and in association with the mysterious inscriptions upon the rocks of Sinai, upon the tombs of Jerusalem, and with and around the chambers of ghostly Pompeii, while others have been brought to light within the area of the Eternal City.
…….
These scrawls, which are of all ages, are of no little interest to the antiquary and the student of human nature.
…….
Though nearly 20 centuries old, the thoughtless school-boy’s scrawls, the love-sick gallant’s doggerel, or the caricature of some friend, foe, or popular favorite, are still as clear as though executed by an idler of yesterday. Although many of these inscriptions are not strictly of importance, yet still they are very suggestive of the humors, vulgarities, and vices of old…….”
— from the March 6, 1881 issue of the New York Times, discussing ancient graffiti