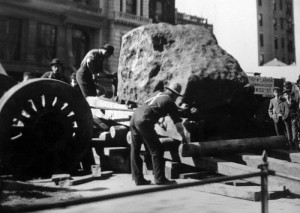 Rock of ages: The meteorite is lifted off its wagon for removal into the American Museum of Natural History. I wonder if those ragamuffins to the right in the photograph have their jackknives ready? (Pic courtesy JFGryphon/Flickr)

As mentioned in last week’s podcast, one of the great treasures of the American Museum of Natural History is the Cape York meteorite — in fact, three separate pieces, the largest being called Ahnighito (Inuit for ‘tent’). Explorer Robert Peary discovered the rock in Greenland and brought it back to New York (along with six unfortunate Inuit companions) in 1897.

The extremely heavy rock — at 31 metric tons — sat at the Brooklyn Navy Yards for many years before Peary’s wife sold the interstellar stone to the museum in 1904. The museum hired a wrecking company to carefully transport the meteorite through New York Harbor to a pier on West 50th Street. From there, it was lifted onto a wagon pulled painfully by 30 hard-working horses, up Eighth Avenue and Central Park West to the museum on 77th Street.

From there, however, the poor unsettled stone, far from home, received its most vicious attack. According to the Tribune: “Hardly had the truckman unhitched their horses when the heavenly body was covered with ambitious boys, all eager to dig out a piece of the metal as a souvenir. Jackknives were broken by the dozen.”

The Cape York meteorite is one of the few items displayed in the museum — may, in fact, be the only item — to appear on an international postage stamp (Greenland, 1978).

Less than a couple years later, the museum bought their second largest stone — the Williamette meteorite — from the widow of Bronx philanthropist William E Dodge.