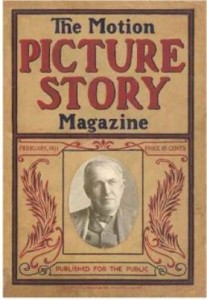 The deluge of movie periodicals that would debut afterwards would help define Hollywood movie stars, foster their fan bases, promote studio films and sculpt the mythology of film history. And it all began from a tiny magazine produced in Brooklyn, at 175 Duffield Street, to be exact.

The magazine wasn’t entirely born without ulterior motive. It was produced by two partners, one of which, John Stuart Blackton, was the head of the young Vitograph Studios. Blackton, a former news reporter turned early film mogul, produced and even starred in pictures filmed from the Vitagraph rooftop soundstage at 140 Nassau Street in Manhattan.

By 1906, Blackton had a Brooklyn location in mind and moved there — Avenue A and East 15th Street in Midwood, to be exact.

Blackton didn’t produce the magazine as a mere mouthpiece for his studio, but to help promote the entire industry. In fact, the cover of the first issue, from February 1911, featured not a movie star, but the man most influential to the entire business at the time — Thomas Edison. The New Jersey inventor who had launched the film industry with his Kinetescope had given Blackton a tour of his Black Maria studio in West Orange, NJ, which inspired him and his business partner Albert E. Smith to later form the rival film studio.

Edison’s appearance was a nod to his influence. Not to mention that Vitagraph was also a partner in Edison’s Motion Picture Patents Company, a trust that kept the young movie industry under the monopolistic control of a few companies.

As the title hints, the Motion Picture Story Magazine reiterated the storylines of several movies of the day. Considering this was early in the silent era — with few title cards and no film over 20 minutes long — the magazine used writers to flesh out the stories. In essence, the descriptions would have enhanced the story, and few would have considered the articles as ‘spoiling’ the action. 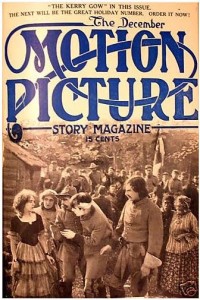 More importantly, the magazine also featured photographs from the films themselves. And in a greater innovation, some of the stars themselves would be featured in closeup, full-page portfolios. This swiftly became the most popular part of the magazine as actors became name movie stars that audiences began seeking out.

It didn’t just provide pretty pictures. The magazine soon began playing along with the film studios, reinforcing the images studio head wished to convey of their early film stars. Motion Picture Story Magazine was more a precursor to a polish-and-shill, People Magazine-style publication than it was to a gossip rag or a serious film journal.

At left: The December 1912 issue, featuring a still from the long forgotten film The Kerry Gow

The magazines would be sold at nickelodeons and movie theaters around the country. To get a sense of what a typical issue would look like the Internet Archive has a copy of the December 1912 that you can read online and even download. (You can find it here.) The issue is stuffed with portraits of current stars, several story descriptions, and lots of early industry ads, most from movie businesses based in New York.

By 1914, the magazine changed its named to simply Motion Picture Magazine and moved its offices to 26 Court Street, across the street from old Brooklyn City Hall. A whole crop of movie magazines had debuted as a result of Motion Picture‘s success, including the Chicago-based Photoplay Magazine. And Variety, a weekly tabloid launched in Manhattan in 1905 that reported on the vaudeville industry, had greatly expanded its film coverage over the years. (It had made film history years before, publishing in 1907 the first movie review.) 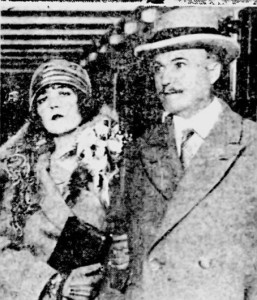 The principal driver of the magazine’s content seems to have been Blackton’s original partner, Eugene Valentine Brewster, a rather colorful character himself. Brewster was a lawyer, politician and occasional film director who left his wife (after a messy divorce) for film star Corliss Palmer. Eugene has flaunted his affair with the actress in front of his wife, even inviting Palmer to live in the couple’s Long Island home “on account of the work in which they were engaged in.” Mrs Brewster received payback, not only from her now ex-husband, but in the form of a successful damage lawsuit against Palmer herself.