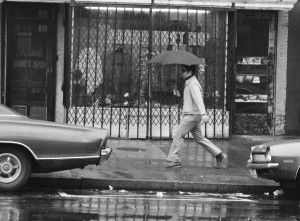 Irving Place and the house that Washington Irving never lived in — in 1905. [Shorpy]

Did you ever wonder why a playground close Irving Place — at Second Avenue and 19th Street — was named after the prolific sculptor Augustus Saint-Gaudens? Wonder no more! [Ephemeral New York]

You can find the first Confederate general killed during the Civil War buried in a surprising place. [City Room]

Watching people race walking is always amusing. Now put one on the Brooklyn Bridge in the early 1930s and you’ve got pure entertainment! [Brooklyn Historical Society]

In our Commissioners Plan of 1811 (aka ‘The Grid’) podcast, we mention the urban marvel known as Manhattanhenge. This year’s first sunlight show happens next Monday and Tuesday (May 30-31) if the rain ever lets up! [Gothamist]