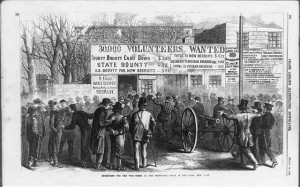 The secession of Southern states starting in February 1861 brought out the best in New Yorkers — and the very worst. The city boldly fueled the early war effort with volunteers and money. But leaders and businessmen with strong Southern ties also attempted to hinder Union momentum. What kind of encouragement is it when the mayor himself threatens to pull out of the Union?

It all came to a head during the summer of 1863 during the Draft Riots, but even that devastating chaos — certainly New York’s most despicable moment — was not the final word. Even as the South began to falter, New York found itself a target of financial conspiracies and shocking acts of terrorism.

The first part of the trilogy will be available this Friday, July 1, so check back here for details. Or visit iTunes and subscribe to our show there so you don’t miss out!

Congrats on 4 great years.. looking forward to a new podcast