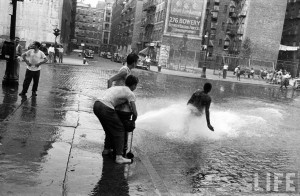 Happy first day of summer! Who doesn’t want to run down a street, streaking through bursts of water emanating from old-style fire hydrants? Although I’m pretty sure nobody has ever tried to guess the identity of the very first ragamuffins to break into a fire hydrant, common sense and a rote knowledge of teenage behavior can help narrow down the candidates.

The very first fire hydrant popped up in New York at the corner of William and Liberty streets in 1808.  So I’m guessing that the first kids to mess with a New York City fire hydrant were those kids that were living on the block within 24 hours of the hydrant’s installation. (I mean, the temptation!) Early ‘flip lid’ hydrants might have been easier to tinker with, but the lack of a dramatic street spray would have bored early vandals.

Ah, but with the debut of high-pressure hydrants in the early 20th century, rowdy street teens could be assured of turning their local neighborhoods into a veritable low-scale city of fountains. By the 1970s, hydrants bursting at their lids would be a defining image of the depressed, cash-strapped decade. No wonder most of these nostalgic ‘fat’ hydrants were shut down by the 1980s. (Forgotten NY has a loving photographic tribute to some old stubs that you can still find around the city.)

The images below are from summer 1953, taken by Peter Stackpole for Life Magazine 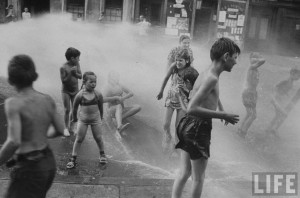 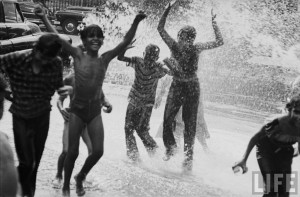 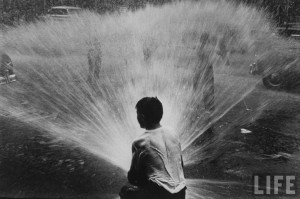 Also, here’s an entire website on the history of fire hydrants, and I recommend giving it a few moments of your time.

4 replies on “Who were the first kids to break open a fire hydrant?”

My dad grew up in the Bronx in the 40s. He says that all the cool kids would have wrenches looped into their pants for the impromptu hydrant-pop.

In the early ’60s , on Kelly Street in the Bronx, we didn’t use wrenches. We used wire coat-hangers to open the valves. We’d grab the hanger where the wires twisted together and pull the middle of the hanger (where the pants usually rested) to straighten the wire out, leaving a loop at the opposite end of the hanger. Then we’d wedge the point of the hanger loop into the space between the hex nut valve and the hydrant head. Then we’d tightly wrap the wire around the valve in the direction the valve opened (counterclockwise). At the loop end, we’d use a stickball bat as the arm of the makeshift wrench to turn open the valve.

The hard part was getting the cap off the hydrant before opening the valve. For that, we’d bang the lid with a rubber sneaker to loosen it as we simultaneously tried to twist the lid off.

I was a kid in Brooklyn in the 70s and ran through many a hydrant when the weather got too sticky – my best friend’s dad had a wrench and would open the hydrant to give us some relief!

Manhattan kids had it down. We hid the wrench behind the garbage cans. So when the cops would come and shut it off we would just turn it on again when they turned the corner. An empty Goya can to shoot it up to the second floor across the street.