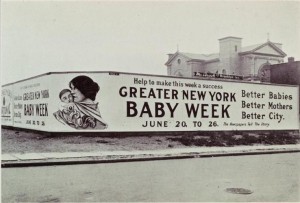 If this were 1914, we would be in the midst of a week-long celebration of New York babies! Actually, the occasion was a bit more somber. According to the photo caption, Greater New York Baby Week was initiated “to reduce the toll of preventable infant deaths by calling city-wide attention to needs met and needs not met for infant welfare in greater New York.” (Photo courtesy NYPL)


Fans of the early days of the New York film industry will geek out over this — the blog Silent Locations an in-depth, self-guided tour of Brooklyn locations used the runaway trolley scene from the Harold Lloyd 1928 film ‘Speedy’. [Silent Locations]

And speaking of Cobble Hill, did you know that Winston Churchill’s mother was born there? [Brooklyn Before Now]

H and H Bagels, a mecca for New York bagel lovers since 1972, is closing its famous Upper West Side location. (Don’t worry: they still have one other storefront, albeit at 46th Street and 12th Avenue.) [The Atlantic]

Marilyn Monroe’s fluttery white ‘Seven Year Inch’ dress — which stopped traffic during filming on at the corner of Lexington Avenue and 52nd Street back in 1964  — collected a breezy $4.6 million in auction on Sunday. [NPR]