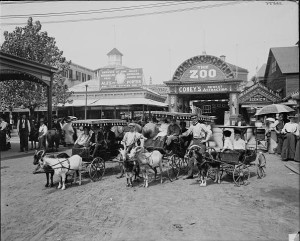 Goats were the environmentally friendly way to see Coney Island in 1904. The short lived ‘Coney Island Zoo’ was actually a part of Dreamland amusement park, alongside the bizarre dwarf village Lilliputia and the infamous room of premie babies in incubators.

The goats pictured above were joined at the modest zoo with a collection of thalycines — also called Tasmanian tigers — an animal that is today considered extinct. According to the blog The Circus ‘No Spin Zone, thalycines were sometimes sold in pet shops, although its extraordinarily wide-opening jaws and non-retractable claws probably made this an unpopular pet.

The zoo — along with the rest of Dreamland — burned down one hundred years ago.

Picture courtesy the Library of Congress.