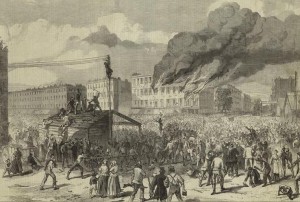 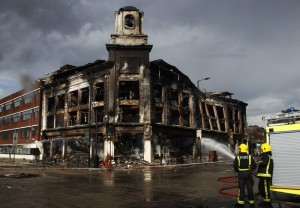 Above: The 1863 Draft Riots and the aftermath of violence in London

In a couple weeks, Tom and I will finish off our three-part Civil War series with a strange tale taking place during the war’s final years. But it seems I can’t quite get our last subject — the 1863 Draft Riots — out of my mind, especially in light of the ongoing riots in London. I don’t profess any particular knowledge on the subject of rioting or its underlying psychology, and I’m far from truly understanding the nuances of the current strife in the UK. But having just studied and talked about violence in the streets of New York, the events in London seem uncannily similar in many ways.

A popular instinct upon hearing about the deadly riots of the summer of 1863 is that such gruesome and senseless mass violence in New York couldn’t happen today. Why, we’re civilized now! There’s always an assumption that people were just more violent back then. And in a sense, that is true. As an example, the rioters in 1863 were only a couple generations from one that used dueling as an acceptable form of resolving conflict. War was in their backyard; death, by epidemics, by diseases today eradicated, was in the front.

The city seemed to stand on two sides, financial and social divides with little to bridge them. It took the announcement of a Union conscription drive — and a $300 exemption for the wealthy — to highlight the disparity of class that played out every day, stripping bare the mechanism to expose the racism (‘nativists’ vs. immigrant, black vs. white) that seemed to fuel almost every aspect of life in New York in the 1860s.

Although the linchpin of the London riots resembles that of other modern conflicts (like the Los Angeles riots of 1992), other details seem to parallel those that occurred in New York almost 150 years ago.

An initial peaceful event (in this case, a protest march in the Tottenham police station) quickly overtaken by mob rule. An initial police action that proves too inadequate. City leaders, off vacationing, caught off-guard. Conflicts between rioters and law enforcement driven by raw anger of class inequality, eventually stripped to acts of thuggery against innocents and, by the third day, spreading like a virus to the surrounding areas. And as we learn more of the individual stories from the London streets, I’m afraid the ugliest aspect of the Draft Riots will also be revealed here — the systematic violence amongst the rioters along racial lines.

That’s nothing explicitly linking the two events other that the very nature of rioting itself. And this is not to say that, ultimately, the London riots may, in some ways, be worse. But I think it’s important to keep in mind when returning to the Draft Riots that such violence and turmoil is not a part of mere historical mindset, but of a chaos that can still make itself known in the modern-day urban world.

New York’s rioters were disorganized and fueled by rumor and assumption. Even with an Internet, 24 hour news coverage and Twitter, the London rioters seem similarly dislodged. But there is one striking difference: UK law enforcement has already arrested hundreds, some thanks to photographic and video evidence. In New York, few rioters were ever prosecuted. That’s partially due to the ascent of the Democratic machine Tammany Hall, which favored the motivations of the Irish rioters. In London, we may find that the political climate there will also influence who is ultimately convicted.

Of course, you don’t need to reach back too far in New York City history to find similar events either. From the Harlem riots of the mid 20th century to even the Stonewall Riots in 1969, seemingly small events (the arrest of a shoplifter, the closure of a dive bar) can auger or spark violent outrage to devastating effect.

And it was twenty years ago this very month that New York saw its last deadly riot in Crown Heights, bringing to force the underlying conflicts of that neighborhood’s black and Jewish populations. Those events began one hot August Monday when a Guyanese child was struck by an automobile in a Hasidic motorcade. By the end, dozens were injured, property burned and one man was killed.

That was just twenty years ago. London is just a seven hour flight from New York. All of a sudden, a 148-year-old riot doesn’t seem like a historical artifact anymore.

1 reply on “Violence across time: the riots of London and New York”

I have been a big fan of your podcasts these last few months, but this is the first time I’ve actually read one of your blog posts. I appreciated and enjoyed the topic, the comparison between NY, London, now and then, as well as your writing style. I found the piece extremely well written and thoughtful.