At the Metropolitan Museum of Art, several feet from the galleries that once held the museum’s colossally successful Alexander McQueen show, sits a fascinating new show that could be described as a hard sell. While exploring the galleries, I had many rooms to myself, a far cry from being sandwiched into the McQueen rooms with thousands of other people, gawking amazed at dresses made of feathers. ‘Stieglitz and His Artists’ will not inspire buzz, but it will delight New York history lovers. 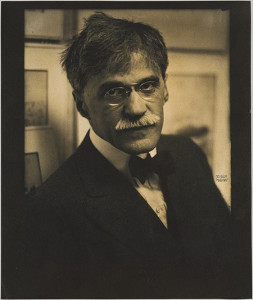 Alfred Stieglitz (at right, photographed by Steichen) is one of America’s great masters of photography, pairing reality and romanticism to frame our perception of modern life in the Gilded Age. His images of New York are iconic, severe, haunting, often luminous. But this isn’t a show about these talents.

Stieglitz was also an early connoisseur and a patron of burgeoning new ideas about art. The Met’s new show ‘Stieglitz and His Artists: Matisse to O’Keeffe’ bears witness to his bold curation of what would become modern art in its early incarnation.

It’s so exact in its presentation that it makes for only a fair artistic experience. But as an abstract diorama of a particular moment in New York history, it’s dynamic, the kind of show that demands you strap on an Audio Guide and take in everything within context. For a museum that excels in both art and history, this show combines both.

Most of the art here once hung in a small gallery owned by Stieglitz at 291 Fifth Avenue (at 31st Street), once the studio of photographer Edward Steichen, creator of my favorite photograph of New York City ever — 1904’s ‘The Flatiron’, of which two prints are on display here. Stieglitz wanted to both educate and dazzle, violently rebelling against common artistic tastes, dominated at this time by the Met itself. (The curators don’t shy at poking fun at themselves in depicting Stieglitz’s distaste for the museum.)

Stieglitz’s gallery was the first in America to feature Pablo Picasso, Paul Cezanne, Henri Matisse and Auguste Rodin, pieces that in total would fetch billions of dollars on the art market today. Back then, they were hardly seen as financial opportunities. The art stunned and confused people, this being the days before the great Armory Show of 1913, which would permanently inject modern art into the lives of New Yorkers.

Despite the subtitle, the show primarily draws its focus onto Stieglitz’s less famous contributors, with individual galleries devoted to Marsden Hartley, John Marin, and Arthur Dove. These may be less interesting to casual museum goers, but it’s here that the show hits its stride as a historical document of early American taste and experimentation.

Despite the spacious rooms of the Met, it’s with these lesser marquis names that you’ll get the feel of what it might have been like to enter Stieglitz’s galleries, the small revolutions that must have taken place with each new show. Some of this art isn’t spectacular. The point of the show isn’t to wow you with striking pieces but to describe a certain way of thinking at its contours. Upon his gallery walls, Stieglitz was literally asking himself, “How far can we push this? What sensibilities can we upturn?” 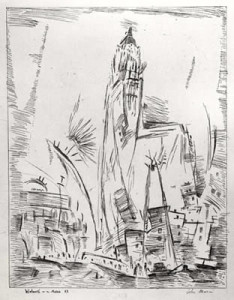 Not that there aren’t a few well-known works mixed in here. Obviously my favorites are some of the early abstract depictions of New York, from Marin’s broken-pose drawings of the Woolworth Building (one pictured at left) to Charles Demuth’s mysterious ‘I Saw the Figure 5 in Gold’.

Naturally the show ends with Stieglitz’s greatest discovery, his own wife Georgia O’Keeffe. Known for her provocative floral and desert imagery, O’Keeffe was the subject of a number of Stieglitz gallery shows, and even the subject of her husband’s own photography. The show ends with an O’Keefee painting you may not be familiar with — her somber inspection of the East River, painted in 1928 from her room at the Hotel Shelton (at Lexington Ave and 49th Street).

As I mentioned, I’m an audio guide junkie, and this show definitely requires it unless you’re well versed in the art scene of a hundred years ago. Throw on your favorite McQueen original and stroll through here some afternoon.

‘Steiglitz and His Artists: Matisse to O’Keeffe’ runs until January 2, 2012. Visit their site for more information.