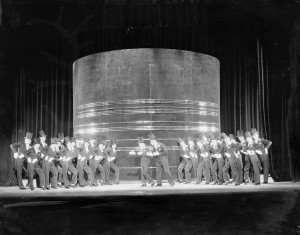 How about a little music for your Monday? I was flipping through some old photographs in the New York Public Library’s Performing Arts/Billy Rose Theatre Division archive and came across some striking images from the musical ‘The Band Wagon’, which opened on Broadway eighty years ago.

The stage musical inspired a more famous Vincent Minnelli film, through the original was also a success when it debuted at the New Amsterdam Theatre in June 1931, a glittering, bejeweled distraction bowing in one of the worst years of the Great Depression. America was hit with staggering unemployment that year (15.9 percent), unsettled by a springtime banking crisis and paralyzed by a near-stagnant Congress. New York state was so badly hit that Governor Franklin Delano Roosevelt, using emergency powers, set up an $20 million unemployment fund, one of the first of its type in America and a harbinger of programs he would employ as president.

I mention this strangely familiar backdrop to underscore how spectacularly luxurious these ‘Band Wagon’ sets must have been to audiences in 1931. This was a time when entertainment was becoming ever more escapist, more refined. These sets reflected the allure of musical revue as a ravishing fantasy, echoed in the songs by Arthur Schwartz and Howard Dietz. Backstage, however, the show’s producers were panicking. Theaters were closing and ticket prices were being slashed (primo orchestra seats for $2.50!) as the financial crisis infiltrated every aspect of the New York entertainment business. ‘The Band Wagon’ closed in January 1932; as did a great many Broadway productions that year, almost two-thirds of them.

But in 1931, Fred Astaire and his sister Adele were still hoofin’ it here. Amongst the other dancing tuxedos of ‘The Band Wagon’ was another star, Frank Morgan, who would sweep off to Hollywood by the end of the decade to portray the Wizard of Oz.

These sets were designed by Albert R. Johnson, who decorated Broadway stages well into the 1960s. 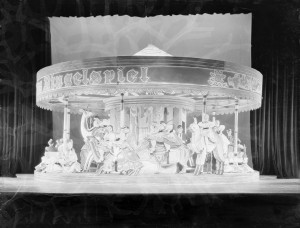 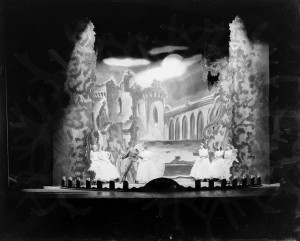 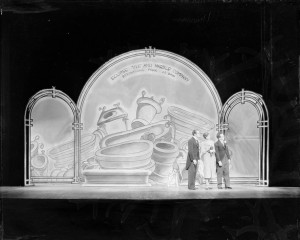 Had you been one of those cashpoor audience members who scored a ticket to a performance, this song would have helped you forget your troubles:

1 reply on “On ‘The Band Wagon’: Grand glamour in a Great Depression”

Up to 1932, Frank Morgan alternated between pictures and B’way plays, appearing in 24 of each. But after a month-long run in a revue called Hey Nonny Nonny! in the summer of 1932, he devoted himself entirely to movies, making 40 more pictures before he appeared in THE WIZARD OF OZ.