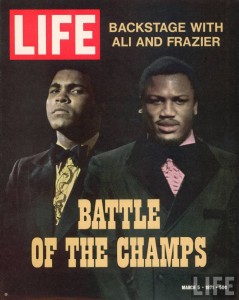 It might have saturated the media with mountains of preemptive hype (such as the spectular Life Magazine cover above), but few would argue that the ‘Fight of the Century’ at Madison Square Garden didn’t live up to its high expectations. On the date of that much anticipated battle, a packed Garden watched as Joe Frazier become the first man to beat Muhammad Ali. A recent countdown of the greatest moments in Madison Square Garden ranked the fight as the third greatest event in the venue’s history.

Frazier recollected later: “At the time they believed he [Ali] was the greatest, but I was a little piece of leather well put together.”