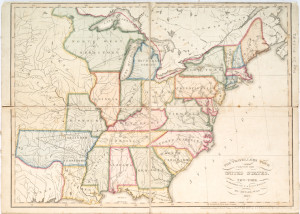 The 24 States: playing field for America’s first board game

HOW NEW YORK SAVED CHRISTMAS My yearly roundup of little events in New York history that actually helped establish the standard Christmas traditions many Americans celebrate today. Not just New York-centric events like the Rockefeller Christmas Tree or the Rockettes, but actual components of the festivities that are practiced in people’s homes. You can read past articles in this series here.

Board games are a staple of the holiday gift-giving season and one of the presents most easily guessed correctly by children when sitting wrapped under the tree. My young niece has already texted me strongly implying she would like to see the new UNO ROBOTO under the tree this year.What if I decided to be the weirdest uncle in the world and give her the first board game ever sold in America — The Travellers Tour through the United States, first manufactured and sold in New York?

Contests played on wooden boards (like backgammon and chess) have been around for millenia, but they were mostly seen as an adult dalliance, often kingly, sometimes undignified, and almost never for children.

The concept of non-physical boxed games for adolescents developed, not surprisingly, for educational uses. Board games are actually the step-children of maps, with many 18th century European models focusing on geographic instruction. Considering the penchant of European countries to invade each other then, this may have been both useful for teachers and vexing for students.

Historians trace the first real children’s board game to that party in a box called The Mansion of Happiness, indoctrinating Puritan values as children maneuvered pieces along a winding, multi-colored path. Although the game was invented in England in 1800, it took several decades to be reproduced in the United States. By this time, New York kids already had their own board game.

It debuted in 1822, courtesy the brother book publishers Frederick and Roe Lockwood. Their father, the spectacularly named Lambert Lockwood, owned a book store in Bridgeport, Connecticut. According to game historian Joseph Angiolillo, it’s believed Lambert also sold ‘linen games’ which could be unfurled on the floor, folded and put away. (Think of Twister, but less shocking.) The Lockwood’s fine home would not be far from that of the downtown Bridgeport residence of P.T. Barnum.

With father’s help, the young brothers moved to New York in the late 1810s to start their own publishing business, setting up a small shop at 154 Broadway at Liberty Street (today, catty-corner Zuccotti Park). They appear to have specialized in ‘foreign works‘ — probably books in other languages — but had a few startlingly devout titles in their collection, from  “Views on Theology: President Edward’s Doctrine of Original Sin, the Doctrine of Physical Depravity” to “The Excellence and Influence of the Female Character.” They even dabbled in game instruction with the 1821 guide “Instructive and Amusing Pastimes.”

In 1822, they developed an educational tool for the purpose of learning American geography — a topic not terribly complicated back then — and called it The Travellers Tour through the United States. Essentially, it was a map of the states and territories, including the freshly unveiled states of Missouri and Maine and the blue lumpen-shaped Arkansas territory. The map was printed on some type of flexible wooden board that could be folded. 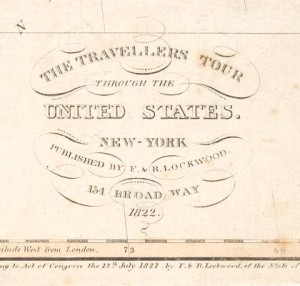 The object of Travellers was to give the names of cities and places, with players following a line around the board. Seems easy, right? In a more advanced version of the game, however, one also had to guess the population total. I cannot think of a more apt symbol of the pride for American expansion than this particular feature. The first player to get to New Orleans won.

There were no dice with The Travellers Tour through the United States, being associated with gambling and vice. Instead, players maneuvered around the terrain via a spinner, a far easier method of cross-country travelling than the one chosen by Lewis & Clark several years previous.

The Lockwoods aimed their board games to holiday shoppers. In in the 1820s, however, many New Yorkers didn’t celebrate on Christmas; in a Puritan throwback, many believed celebrating on Jesus’s birthday itself was too unholy. New Years celebrations, however, were just as relevant, with families visiting the homes of friends and neighbors, often bearing gifts.

The brothers Lockwood were ready: “VALUABLE NEW-YEAR PRESENTS,” according to one old newspaper.”The works of Byron, Scott, Cowper, Moore….in elegant bindings.” And among the books they sold backgammon and chess boards. With such games for adults, the Travellers series must have seemed a desirable purchase, lest they leave the children jealous.

The Lockwoods continued making books through the 1820s at this location, although it doesn’t appear they were in business together after 1830. One source mentions Frederick Lockwood as a watchmaker later in life. His brother Roe, however, stayed in the book business, partnering with his son. It appears he even later published the extraordinary illustrations of John James Audubon.

I’m not sure what happened with the building at 154 Broadway, but if it was still standing in 1845, it was surely destroyed in the Great Explosion of 1845.

One final note — in 1822, just as the Lockwoods were debuting their new board game, a wealthy gentleman uptown in his estate (the austere Chelsea manor) became inspired by the holiday season and wrote a festive poem. The following year, that man, Clement Clarke Moore, published it under the title “A Visit From St. Nicholas,” aka ‘Twas the Night Before Christmas.”

1 reply on “The first board game: Before Monopoly, a whirlwind tour around America became the perfect Christmas gift”