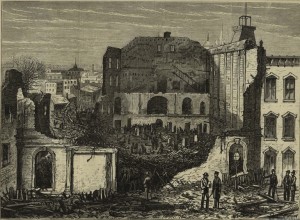 It is difficult to discuss calmly the frightful disaster which happened in Brooklyn on Tuesday night. No such awful sacrifice of human life has ever been known in this country shipwreck and the casualties of war alone being excepted. — New York Times editorial, Dec. 7, 1876

One hundred and thirty-five years this evening, nearly a thousand playgoers entered the Brooklyn Theater, at Washington and Johnson streets near City Hall, to enjoy the well-reviewed (and lengthy) production of N. Hart Jackson’s ‘The Two Orphans’. During the show’s final act, stage hands discovered that a set piece backstage had caught fire. The actors onstage attempted gamely to stay in character, for fear of causing a panic, until fiery bits of wood and flaming parts of the set began raining down upon them.

Those in the upper tiers of the theater — the ‘family circle’, or cheap seats, filled with men, women and children — were trapped by smoke within darkened foyers and unnavigable stairwells. Some fell from balconies to their deaths. Dozens were crushed heading for doorways, and to some of those who survived, it seemed that all respectability had given way to base animal behavior. Most perished by suffocation or underfoot, while others were lost into the oblivion of belching smoke when weakened floors gave way. 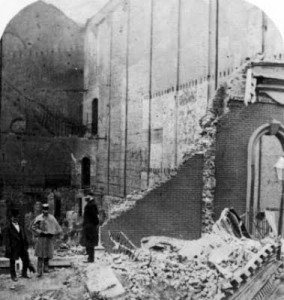 Since 1869, Brooklyn had a paid fire department, and many fought the fire from the streets. But the rudimentary firefighting implements of the day were unable to combat the inferno. The Brooklyn Theater burned for several hours more, dying out by early morning. Throughout the night, most could only watch — what to do, plunge into darkness? — and many did watch. Thousands flocked, some to help, others fascinated, horrified.
Inspectors found an unspeakably grisly sight the next morning, heaps of burned bodies in formless masses — people choked or crushed, their remains almost unrecognizable amid blackened debris. In an eerie parallel to two later disasters (the General Slocum explosion of 1904 and the Triangle Factory Fire of 1911), a make-shift morgue was prepared on nearby Adams Street to accommodate the dozens of unidentifiable corpses.

The place where the theater once stood is now occupied by Cadman Plaza, in the grove of trees just east of the Henry Ward Beecher statue. Many of the bodies (over a hundred) are buried together under a memorial at Green-Wood Cemetery. 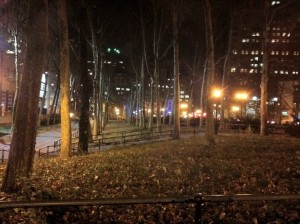 4 replies on “A Wretched Anniversary: The Brooklyn Theater Fire of 1876”

Wasn’t Laura Keene performing that night? I had read somewhere that she was.

Wow, you write so vividly I felt like an eyewitness. I had seen the memorial monument in Greenwood a few months ago. So sad. I used to pass that little section of Cadman Plaza every day after work, I never stopped to realize it was the actual site of the theater. :O

how sad. how awful.

I had four family members who perished in that fire. My great-great grandmother, who turned 30 just two weeks before the event, had a ticket as well and only missed the show because she got stuck at work while her four brothers (two brothers and two half-brothers) attended…and all four perished in the fire. Had she made it to the show, I wouldn’t exist, as she undoubtedly would have perished as well and my lineage would have stopped right then and there in 1876. According to my great grandfather’s (her son’s) memoir, she wore black every day the rest of her life.