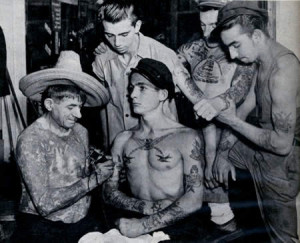 Charlie Wagner (seen above, in the sombrero) was New York’s most skilled and revolutionary tattoo artist of his day, plying his ink trade behind the partition of a “five-chair barber shop” on the Bowery, according to a 1943 New York Times article. His shop was at 11 Chatham Square (pictured below), unsurprisingly located beneath the elevated train station.

In that article, he heralds the war effort for driving up the demand for tattoos. (The headline of the article is actually ‘War Booms The Tattooing Art’.) His most popular piece featured an inked dagger with the phrase “Remember Pearl Harbor, Dec. 7, 1941.”

Wagner is an historic figure of subculture, the “dean of tattoo artists,” designing and administering his work for almost half a decade, from his first apprenticeship in 1908 (in the very shop he was to later own) to his death in 1953. He even held the patent for an “electric tattoo device“, a precursor to the tools used by a modern tattooist.* Wagner decorated many of Coney Island’s early sideshow stars and is even credited with being among the first to apply ‘permanent lipliner’ for women. 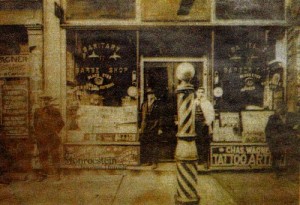 But the war also produced unfavorable results for Wagner. He was arrested in 1944 for violating the city’s sanitary code due to allegedly unwashed needles.

Sadly, when Wagner died, most of his work was thrown out, so we have little original documentation of his particular artistry. Yet his influence was noted later that decade in an article by young writer Gay Talese. “A tattoo fan can distinguish the precise pecks of Chicago’s famous Tatts Thomas from the free strokings of the late Charlie Wagner as easily as an art critic can tell a Modigliani from a Grandma Moses.”

*Some also credit the invention of the tattoo machine to Wagner’s mentor Samuel O’Reilly, who first owned the Chatham Square tattoo/barber parlor. It seems likely they worked on it together.

1 reply on “From a Bowery tattoo parlor: “Remember Pearl Harbor!””