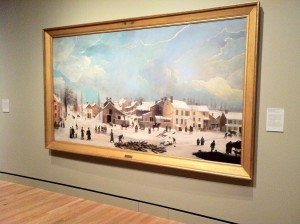 Wal-Mart is aggressively lobbying to bring its chain of big box stores to the New York City region. In the meantime, a member of the Walton family is buying up bits of New York and taking it back to Bentonville, Arkansas, the headquarters of Wal-Mart located in the Ozark Mountains.

I just got back from visiting my parents who live in neighboring Missouri and swung by Bentonville to visit the Crystal Bridges Museum of American Art, which recently opened in November, the project of Alice Walton, daughter of Wal-Mart founder Sam Walton. It lands in the region a bit like an alien spaceship, its arched and twisted architecture (think L.A.’s Getty Center as inspired by dinosaur fossils and river gulches) just one mile away from the quaint storefront-turned-museum that was the very first Wal-Mart store.

Alice Walton did an infamous tear through the art scene in the last two decades, buying up a great many well-loved works in anticipation of this project. Along the way, she also bought up a significant area of Brooklyn.

Or rather, its most famous early depiction. Francis Guy was one of America’s earliest landscape masters, making his home in the village of Brooklyn in 1817. From then until his death in 1820, he painted what interested him from his second floor window on 11 Front Street, a series of panoramic, cool-hued works capturing both Brooklyn’s bustle and serenity.

The Brooklyn Museum proudly displays one version of Guy’s spectacular work, called ‘Winter Scene In Brooklyn’. But the other version of this painting now sits in Arkansas, at Crystal Bridges. It sits in a  prominent place indeed, across from a Gilbert Stuart portrait of George Washington and a noble portrait by John Trumbull of the man the Stuart portrait was painted for, Alexander Hamilton. They’re all in great company in this warm, expansive new building.

By the way, his version of ‘Winter Scene’ once sat on loan next to its companion at the Brooklyn Museum in 2006. The Brooklyn Historical Society has Guy’s summertime version of this view.