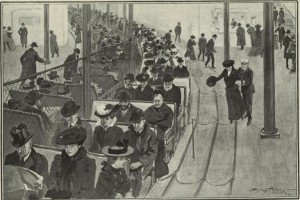 Have you ever walked down a New York sidewalk and thought, “I’m wasting so much energy creating my own forward motion. Why can’t the sidewalk do some of the work?” In one vision of the future, city sidewalks operated as a conveyor belt, whisking people to their destination in a steady stream of moving seats.

This wacky and most likely death-defying public transport was seriously considered in 1903 as a way to link the three downtown bridges — the previously built Brooklyn Bridge, the brand new Williamsburg Bridge and the yet-to-be-completed Manhattan Bridge. This ‘system of moving platforms or continuous trains’ would flow from the Williamsburg Bridge terminal down to Bowling Green via underground tunnels. In essence, a subway without the subway car.

Proposals called for six miles of platform that connected to both elevated trains stations and, presumably, the actual subway platform under construction at City Hall. Passengers got to their seats by a double layer of ‘stepping platforms’ which moved at different speeds — 2 1/2, 5 and 7 miles per hour. In theory, one simply alighted from one conveyor to the next. Imagine how fun this would be with a baby carriage or an armful of packages!

Harper’s was confident this mode of transport was on its way, citing the use of ‘continuous trains’ at the Chicago and Paris Expositions and the fervent support by prominent New York businessmen. No less than New York’s bridge commissioner Gustav Lindenthal briefly promoted the plan.

Alas, this dizzying and complicated form of basic transportation was never realized. Interestingly, plans for the Second Avenue Subway below Delancey Street closely mirror the original route of the moving sidewalk. And there are already serious plans for a subterranean park on the Manhattan side of the Williamsburg Bridge, where the moving sidewalk was to have terminated. So this horror show may yet see the light of day!

2 replies on “2012! Will this be the year New York gets moving sidewalks?”

It is really not that crazy of an idea. The very term “people mover” comes from Disney’s version of this very idea, the WEDway PeopleMover. One operated at Disneyland from 1968 – 1994 and another has been open at Walt Disney World’s Magic Kingdom since 1971.

Disney intended for the WEDway PeopleMover to be a very real transit system. It was to be the primary transit in EPCOT (the city, not the theme park). A version that stops was built for George Bush Intercontinental Airport in Houston which continues to operate. The technology was eventually sold to Bombardier and served as the basis for their line of people movers.

Before they made it into the lovely park that it is today, I thought this would have been a wonderful use for the abandoned High Line (and part of me still does!)