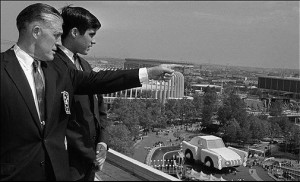 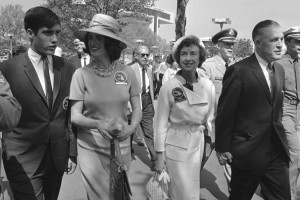 Apparently there’s some controversy involving the latest campaign ad from presidential hopeful Mitt Romney.  The ad, aimed at Michigan primary voters, displays the photograph at top while Mitt’s voiceover discusses ‘going to the Detroit auto show’. That may have just been some unfortunate sound editing, as Mitt was not in Detroit, but rather at the New York World’s Fair for ‘Michigan Day’ on May 18, 1964.

With his father, Michigan governor George Romney, young Mitt would have started his day with a breakfast at the fair’s spacious Top of The Fair Restaurant, entertained by master of ceremonies Arthur Godfrey and the musical stylings of the Michigan State marching band and a vocal ensemble from the University of Detroit. After a tour of the fairgrounds, the Romneys presented New York governor Nelson Rockefeller with a bushel of Michigan apples. For lunch, the governors and their entourages enjoyed a turkey luncheon at the Belgian Village (one of the more popular destinations thanks to a hot new food item, the ‘Belgian waffle’).

Many states had individual pavilions at the fair, including Alaska, Wisconsin, Illinois, Missouri and others. (And, obviously, New York.) Michigan didn’t have a pavilion per se, but was clearly represented via the automotive pavilions. In the second photo above, the Romneys are headed towards the General Motors pavilion, one of the highlights of the fair, with its kitschy Futurama presentation. Teenage Mitt would certainly have been subjected to this spectacular and bombastic prediction of the future. Perhaps he was as filled with wonder as the child in this video:

It’s interesting that Romney was there with Rockefeller, as both were seeking the Republican nomination for president later that year. Both men were sidelined at the convention that year in favor of Barry Goldwater.

Surprised you’d single out GM’s display, when photo #1 gives us a peek at Ford’s showpiece: the Wonder Rotunda….it’s right there in the background, partially obscured by Romney Sr.’s arm.

Ford’s pavilion was a huge success — one of the Fair’s most popular attractions, in part because it was used to introduce the new Mustang. Here’s a gallery of images, showing exterior and interior.:

The original caption for the second video said they were in route to the GM building….and honestly I was just looking for an excuse to post that crazy Futurama video!