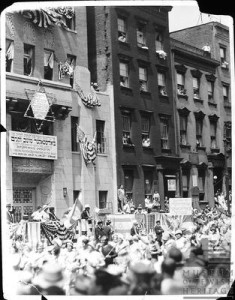 Bialystoker Home for the Aged may not make it into many tourist guides, but this Lower East Side art deco artifact holds an important link to New York’s immigrant history. It was just born on the wrong side of the street, and because of that, it’s an endangered structure.

On the south side of East Broadway, between Canal and Montgomery, stands some of New York’s most important Jewish landmarks, from the towering gleam of the Forward Building to a cluster of surviving 1830s rowhouses and tenement synagogues that held the first critical waves of Jewish immigrants in the mid-19th century.

At right: The Bialystoker building on its opening in 1931 (courtesy the Museum of Jewish Heritage)

On the north side of East Broadway, however, these sorts of historical structures east of the Seward Park Library were knocked down and replaced in the 1950s with an immense cooperative village in the fashion of Stuyvesant Town, a series of housing towers interlocked with open spaces and playgrounds.

The Bialystoker building (228 East Broadway), which opened in 1931, is a relic in comparison to its immediate neighbors, a parking garage (which notably collapsed in 1999) and a banal 1960s medical building known for a chipping mural on its side and to HBO subscribers as ‘the New Zealand consulate’ on the TV series ‘Flight of the Conchords‘. (Full confession: I lived across the street for both the collapse and the filming, so I find the block particularly endearing.)

Its two-toned tannish, art deco facade by architect Henry Hurwit makes an unusual silhouette for the neighborhood, and perhaps that alone should make it a candidate for preservation. But it’s the building’s unique history that makes a necessary keepsake of the Lower East Side.

This and many other structures around here trace to a specific immigrant lineage — the Polish Jews of Bialystok, near the border of Belarus. It’s remarkable to think of thousands of Bialystok immigrants — nearly the entire Jewish population of the city — crossing the ocean, entering Ellis Island, and settling  here, and specifically here, in this area of the Lower East Side.

Around the corner, up two blocks, is the Bialystoker Synagogue, a refitted 1826 Episcopal church that collected various neighborhood Jewish congregations and moved in here in 1905. From a cursory glance at its exterior, you might never know that inside is one of New York’s most stunning synagogues. And hopefully everybody is familiar with the wondrous, doughy bialy, the cousin to the bagel, and its supreme baker Kossar’s Bialys up on Grand Street.

The synagogue is an official historic landmark, and Kossar’s a treasured stop on walking tours. The former Bialystoker nursing home has no such protections.

The elderly home was funded by a Bialystoker aid society in the 1920s as an alternative to standard city institutions. The cornerstone was laid in September 1929, accompanied by a massive parade, 25,000 people carrying “flags and banners with Jewish inscriptions and marched through Canal, Grand and other streets.” [source]

The new arrivals to the neighborhood benefited from the charity of wealthier Jewish immigrants who had arrived earlier and funded projects to ease overcrowding and providing health and education services catering to specific religious customs. The Bialystoker building is perhaps the most striking example of this beneficence. Its design is Moorish Art Deco, of a kind you might see off to a corner in Rockefeller Center. Possibly considered plain in its day, but now seen as beautiful and understated. In particular, its doorway is a marvel; the artfully carved BIALYSTOKER is joined by a dozen medallions representing the twelve tribes of Israel.

Its grand opening on a hot summer day in June 1931 was a premiere event, with another parade drawing tens of thousands, and people crammed onto rooftops and fire escapes to witness the event. Awaiting inside were rooms for several dozen residents, as well as “auditoriums, dormitories, two synagogues, sun parlors and hospital wards.” [source] The Museum of Jewish Heritage has some remarkable photographs of the opening which you can peruse here.

The nursing home has faithfully and quietly served the community for 80 years. Along the way, its seen some prominent and very, very old residents (like 111-year-old Benjamin Kotlowitz). Last year, due to mounting debts and “inadequate Medicaid reimbursement,” the home was forced to close for good.

The building is currently on the market and, as it has not been landmarked, is a candidate for demolition. You can sign a petition here to help the effort to get this unique building saved. The Friends of the Lower East Side also has more information on this remarkable window on New York’s immigrant history.

5 replies on “Bialystoker Home, a remarkable Lower East Side treasure and home for assisted living–now in need of some assistance”

It should be preserved and returned to the intended use, sorely needed in this neighborhood, of serving the senior population here. The sale to a Board member, while vaguely “legal”, cast a cloud over the Board and was a grave diservice to an institution that was created to protect those in desperate need of protection.

Now that St. Vincents is being condo-ed, how ’bout the Bialystoker Home becoming a hospital?

My great grandmother was there from 1933 to 1935. I am trying to get info about her for genealogy. Who has the records now?

My grandfather saul Ornitz did the brick work on the building