A spectacle from a hundred years ago: St. Patrick’s in 1912, in a gauze of electric lights. The picture below this post illustrates how this particular light performance made the church standout among the as-of-yet mild landscape of Midtown East. Pictures courtesy the Library of Congress

We hope you like our new podcast on St. Patrick’s Cathedral. Very odd timing to be releasing a Catholic themed podcast, given that Archbishop Dolan is set to turn Cardinal tomorrow and, oh right, the contraception controversy.

The church is closely linked to the history of early Irish New Yorkers. However there were obviously huge bodies of Catholics of other nationalities in the mid-19th century, particularly German Catholics. Archbishop John Hughes himself said that “people were composed of representatives from almost all nations.” That said, Germans Catholics opened their own churches, in particular the Roman Catholic Church of the Most Holy Redeemer, opening in the East Village in 1852, in the new German enclave of Kleindeutschland.

Here’s an interesting read about the 1989 ACT UP protest at St. Patrick’s, from a person who was actually arrested at the protest!

VISIT: The official site for St. Patrick’s has a historical timeline, a map, and information on tours.

MUSIC: The music in this week’s show is from the album ‘O Come Let Us Sing’, featuring the St. Patrick’s Cathedral Choir and St. Patrick’s organist Donald Dumler. You can find the album on iTunes.

CORRECTIONS: I made a big blunder in this episode. I’ve always prided myself in New York movie trivia, yet I flubbed it in this episode. ‘The Godfather III’ was filmed at St. Patrick’s Old Cathedral, not at the new one. Sorry for the error.

Speaking of the old cathedral, it’s now a basilica, if you haven’t heard. Although we speak about the original Mott Street cathedral in this episode, you might like to check out our old show (Episode #9). You can tell we’ve come a long way in this podcasting thing! 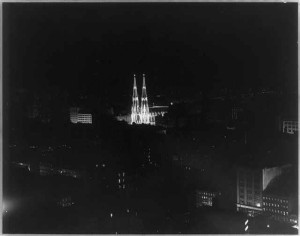 TIMELINE: We do things a bit out of order at the start of the show, so I thought I’d lay out some of the key dates for you for reference. St. Patrick’s website also has a historical timeline that you can use to follow along. But of the things we speak about:

1801 — David Hosack opens his Elgin Botanical Garden in the vicinity of today’s Rockefeller Center.
1808 — The Diocese of New York is created
1810 — The land where St. Patrick’s sits today is sold to an insurance company, the Eagle Fire Company. One of the trustees of the board is Archibald Gracie. By this time, the Jesuits had already constructed a building on this property.
1813 — Augustin De Lastrange arrives in New York. The following year, he bought the structure and, for a short time, sets up a Trappist monastery here.
1815 — St. Patrick’s Cathedral opens downtown at Mulberry Street.
1828 — The mid-Manhattan land is sold to Francis Cooper, on behalf of St. Peter’s and St Patrick’s, with the intention of building a cemetery
1838 — John Hughes is made a bishop
1850 — The Diocese of New York becomes an archdiocese
1858 — The cornerstone to St. Patrick’s new cathedral is laid. By this time, the controversial figure Madame Restell has already built her mansion across the street, and quite on purpose it seems.
1864 — John Hughes dies
1878 — The ‘Great Cathedral Fair’ is held, raising enough funds to finally complete the structure
1879 — The new Cathedral is officially dedicated
1888 — The cathedral’s distinctive spires are finally completed.