PODCAST One of America’s most famous churches and a graceful icon upon the landscape of midtown Manhattan, St. Patrick’s Cathedral was also one of New York’s most arduous building projects, taking decades to build. An overflow of worshippers at downtown’s old St Patrick’s demanded a vast new place of worship, even as most Catholic New Yorkers were having an uneasy time due to religious prejudice by angry ‘nativists’.

Enter ‘Dagger’ John Hughes, the relentless first Archbishop of New York, who hammered the city for equal treatment for Catholics and managed to construct several New York institutions still in existence. Many scoffed at his idea of building a gigantic cathedral so far north of town.

We explore the early years of this once-quiet piece of mid-Manhattan real estate and some of the notable events that have taken place at St. Patrick’s since its opening.

ALSO: The tale of the revered Haitian hairdresser in the crypt!

Before ‘uptown’ St. Patrick’s, there was downtown St. Patrick’s, the original cathedral which was consecrated in 1815. By the 1850s, with the number of Catholics growing due to immigration, a larger, grander structure was required, one that reflect the congregants’ growing influence. The image below is from St. Patrick’s before the 1866 fire. The facade was rebuilt with less ornamentation. 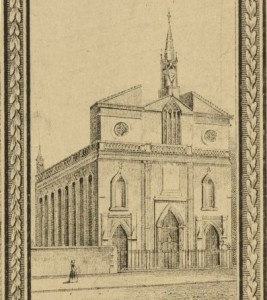 The land where St. Patrick’s sits today was wooded and sparsely populated 210 years ago. But for a short time, in 1814, a Trappist monastery sat here, the haven of French refugee Dom Augustin de Lestrange. 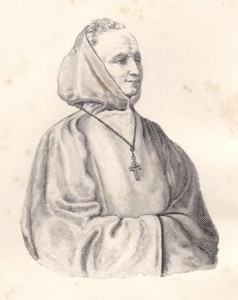 The undisputed religious leader of New York’s Catholic community was Archbishop John Hughes, whose fierce tenacity — and curious signature — earned him the nickname ‘Dagger John’. He spearheaded the construction of a new cathedral, in an area of town that, in the 1850s, was nowhere near the center of the city. ‘Hughes’ Folly’ would take two decades to build; by the time it was completed, Fifth Avenue had entirely transformed. The Archbishop’s risk had paid off. (courtesy NYPL) 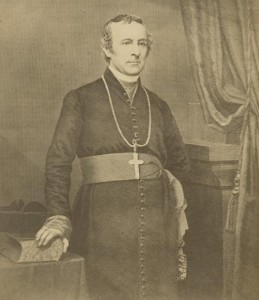 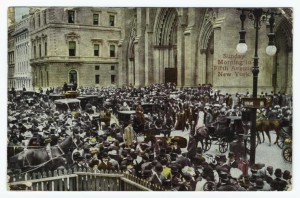 An image from the late 19th century. The famous 20,000-lbs. bronze doors, featuring three-dimensional sculptures of saints, would not be installed until a few decades later. (Courtesy NY State Archives) 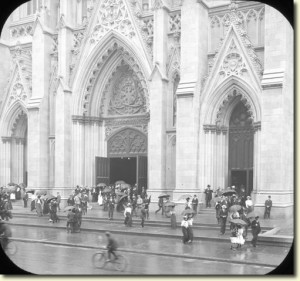 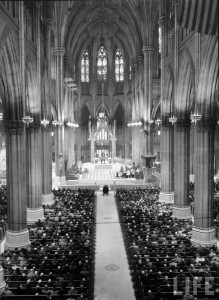 Worshippers in 1944, as photographed by Alfred Eisenstaedt for Life Magazine. 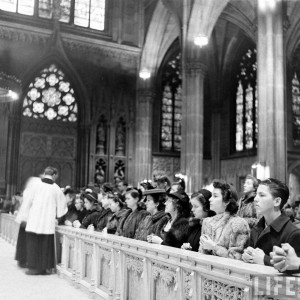 Another shot of St. Patrick’s in 1909, in one of the last years the cathedral would be surrounded with residential homes. By 1924 it would get its neighbor Saks Fifth Avenue. Fifteen years after that, Rockefeller Center would rise across the street. 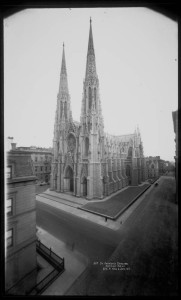