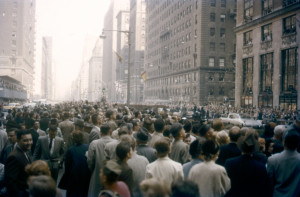 New Yorkers greet the Queen with a tickertape parade in 1957. Courtesy jeffs4653/Flickr

What do you buy a queen on her Diamond Jubilee, celebrating 60 years on the British throne? Well, most royal figures are quite difficult to buy for, but luckily, Queen Elizabeth has already revealed her preference in local department stores. For back in 1976, the woman who never goes shopping found herself one late afternoon perusing the merchandise at Bloomingdale’s department store.

Queen Elizabeth has been to New York three times during her sixty year reign over the Commonwealth. In a couple cases, she came specifically to address the governing body at the United Nations Headquarters but managed to squeeze in a few extra activities each time, befitting her status as one of New York’s wealthiest, most high profile tourists.

She first arrived in 1957, via Staten Island, riding over to Manhattan in an Army ferryboat. In the harbor, she caught sight of the newly built replica of the Mayflower (the Mayflower II), fresh from its completed voyage retracing the Pilgrims’ course over the Atlantic. The Queen was practically wide-eyed during the ticker tape parade in her honor, with over a million New Yorkers lining the streets to see the young monarch, from City Hall to the Waldorf-Astoria.

Her favorite moment arrived after the UN session, when she was whisked to the top of the Empire State Building to gaze out of the hazy city. Like any great New York trip, she was out too late, arriving at Idlewild Airport at 2 in the morning for her trip home. She shared her thoughtful take on her experiences here: “The mental pictures of New York are nearer reality than those of any other city.”

Below: Queen Elizabeth on her second visit to New York, 1976, courtesy Madison Guy/Flickr 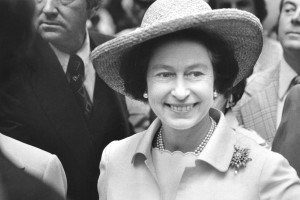 In 1976, she and Prince Phillip returned the city, a bit older and less desirous of scaling skyscrapers this time around. As part of the city’s bi-centennial celebrations — and perhaps inspired by the Mayflower on her previous visit — the Queen decided to participate in a little historical reenactment herself. Most famously, the Queen graced the steps of Trinity Church to receive back rent owed the crown — 279 peppercorns. (I wonder where they found peppercorns in 1976 Manhattan, this being the days before Whole Foods?) A bronze plaque presently marks the spot at Trinity where she accepted the peppercorns.

After a luncheon at the Waldorf (“relaxed, animated and fairly hungry”), the royals fit in a couple unusual stops. The first was a spot of afternoon tea at the Morris-Jumel Mansion, accompanied by the Daughters of the American Revolution. Afterwards, they sped downtown for a tour of Bloomingdale’s, not only stopping traffic, but reversing it, to allow the Queen to exit her vehicle from the right side.

She quietly moved from floor to floor, admiring the many displays of products of British make, particularly the pottery and furniture. She was also greeted to a private fashion show, Her Majesty led through a room of mannequins garbed in the latest stylish trends from 1976. Along the way, a few American designers made appearances to greet Queen Elizabeth, including Calvin Klein.

What accounts for such an unusual detour in the Queen’s itinerary? Apparently, bedazzled by her 1957 trip, she wanted to do as New Yorkers do. Or, as a representative of Bloomingdale’s remarked, “we thought — and the Queen agreed — that it would be a very American experience for her to go amidst all the crowds and just pretend she might be shopping.” [source]

If the entire event seems a tad surreal to you, this was then reinforced by the presentation of a Sioux peace pipe to the Queen, meant to “symbolize the peace that has existed between Great Britain and the United States.”

This would be her lasting memory of New York for 35 years, until 2010, when she returned again for a few hours to address the UN and to visit Ground Zero. Given the sobriety of her visit, she did little sightseeing but braved the 100-degree weather with her trademark stolid grace.

Anybody have photos of the royals in their Rolls’ from 1976 ?

Yes, in 1976 I was on Broadway watching the Queen and Prince Phillips’ downtown parade with Nikon in hand. As the Queens car approached I climbed up a lamppost to get a good shot. This startled the Prince as I brought the large black camera up and I remember his expression in my viewfinder – click.

I remember the Queen’s visit to Jumel Mnsion. I lived across the street in 555 Edgecombe Avenue. I was 7 or 8 at the time. I was with my friend, Angela. She also lived in 555. I remember people let us stand right behind the police barrier so we could see. The Queen walked right passed us. She smiled and said “Hi.” Of course being 7 or 8, we said “Hi” back. How I wish I had smiled and curtsied, maybe she would have stopped and talked to us for a few moments and we could have gotten our picture taken or been on TV. I remember thinking that she was pretty. Whenever I see her on television now and she really smiles, that smile and the merriness in her eyes are as I remember