The recent trailer to Baz Luhrmann’s The Great Gatsby, aka ‘Moulin Rouge in Manhattan’, seems to have left everyone in a state of awe (and horror) in its vivid, hyper-electro-glossy depiction of Prohibition-era New York. And it left many feeling slight panic, even apoplexy, especially considering the entire spectacle will be rendered in 3D when it’s released in December. Oh God. Will flappers kick whimsily towards the camera?

So how accurate was Lurhmann in his glamorous take on Times Square of 1922? How accurate was it supposed to be? Many have already taken note of one glaring and unforgivable error — misspelling the name of Florenz Ziegfeld on the sign for the ‘Ziegfeld Follies’. That ridiculous mistake overshadows a possibly smaller error, that the Follies were actually performed down at the New Amsterdam Theatre on 42nd Street in 1922. However, the Follies from the year before were hosted at the Globe Theater on West 46th Street (today’s Lunt-Fontanne Theatre), quite close to this sign. So perhaps they just kept it up.

Clearly, Luhrmann is interpreting New York, not emulating it. ‘Moulin Rouge’, after all, was Paris through a hazy scrim. He’s filtering the glitz of F. Scott Fitzgerald‘s work through his own dreamlike aesthetic and doesn’t need to fact-check every sign and street corner. Still, the trailer does feature some interesting obscure details, and I can’t help myself.  If you saw a different detail, please post about it in the comments section:

— Queensboro Bridge The trailer opens with a spectacular look at the Queensboro Bridge, a potent symbol in the Fitzgerald novel. “Over the great bridge, with the sunlight through the girders making a constant flicker upon the moving cars, with the city rising up across the river in white heaps and sugar lumps all built with a wish out of non-olfactory money.”

The bridge opened in 1909, and it’s a defining image of the Jazz Age, not least of which because the population of Queens almost tripled during the 1920s. There were certainly trains on the Queensboro — it was built to accommodate them — but I’m not sure about that particular train.  Below it sits grimy old Blackwell’s Island, renamed Welfare Island in 1921 and certainly looking the part. 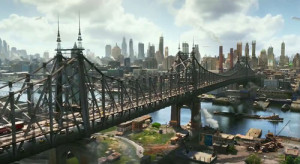 — Skyscrapers Oh Lord. I don’t think this depicts New York at all but is a composite view of various buildings of the age. Far to the left in the trailer I see structures that look like the Singer Building and the Woolworth Building, but they would not be seen from this angle. Besides, the Woolworth would be taller than the Singer. See below for a size comparison, in a picture from 1922, looking northeast.

There are some vaguely Flatiron Building/Met Life Tower type structures, but they look like they’re on 42nd Street.  And why do I think I can see something that clearly looks like the New York Central Building (later the Helmsley Building) which wasn’t finished until 1929? 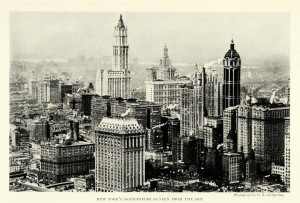 — Times Square Signs An array of illuminated products logos — in various colorful hues foreign to Times Square in 1922 — gives the Crossroads of the World a mystical glow. The tony Hotel Astor adorned in lights dominates the plaza to the left. Nearby is an ad for Douglas Fairbank‘s ‘Robin Hood’, released in October 1922. It played at the Lyric Theatre. Fairbank’s rival Rudolph Valentino and actress Norma Talmadge created a buzz when they attended the film’s premiere together here.

It’s next to the advertisement for Hydrox (the sandwich cookie which debuted in 1908) and the Capitol Theater, a movie palace which opened in 1919. The tire ad is a nice touch, recalling Times Square’s status as the center of automobile sales and repair during the early 20th century.

Below the Zeigfeld [sic] Follies sign is an advertisement for Sonora, a phonograph company that began producing radios in 1924. Their slogan ‘Clear As A Bell’ harkens back to the company’s original product line — clock chimes.

To the right of those is a sign for the Columbia Theatre, “the royal palace of burlesque” in the 1920s. The theater opened in 1910 with decor of “Roman gold and and French gray, and the hangings and carpets are of rose du Barry.” It became the Embassy movie theaters in the 1970s.

Later on in the trailer, an ad can be seen for Arrow Collars, the detatchable shirt collar company that went on to spawn America’s first male model type, the ‘Arrow Collar Man’, the sort of debonair type who populates the world of Gatsby. Of course, the demand for collared shirts pretty much killed of this industry by the end of the decade.

— Grand Central Oyster Bar There appears to be a brief scene at this lush location with its vaulted ceilings. The Oyster Bar would have indeed been a thriving spot in 1922 and an ideal place to mix business with pleasure. A few years later, so goes the legend, David Sarnoff formed RKO Pictures over a few oysters here with Joseph Kennedy. In 1922, Tin Pan Alley lyricist Al Lubin met his music partner Harry Warren here. They went on to create the film musical 42nd Street in 1933.

— Yellow Cab Co.? There are many brief glimpses of taxicabs, including those of the Yellow Cab fleet, which would later be purchased by the Checkered Cab company in 1929. In 1922, the Yellow Cab successfully won a ruling barring other paid-ride automobiles from being painted yellow. ‘1,000 Cabs Face Change of Paint.‘

— Blood And Sand A prominent movie marquee is shown near the trailer’s end for Rudolph Valentino‘s ‘Blood And Sand’, a summer box office smash in 1922. This film debuted at the Rivoli, at 1620 Broadway, at 49th Street. From the New York Times film review on its debut: “Mr. Valentino has not been doing much acting of late. He’s been slicking his hair and posing for the most part. But here he becomes an actor again.” Let’s hope the same can be said of Leonardo DiCaprio, who plays Mr. Gatsby.

By the way, the 1974 version of ‘The Great Gatsby’, starring Robert Redford and Mia Farrow, premiered — with attendees in full ’20s regalia — at the Loews State Theater at 1540 Broadway at 45th Street. “The guests, many of them in Teflon or Daisy white, whatever you want to call it, were greeted by hundreds of celebrity gawkers, reporters and photographers.” [source]

Below: A clip from the Valentino film:

As I rewatch the trailer over the next few days, I may amend this article with further information. If there’s something obvious that I’ve missed, please let me know in the comments below!

Thanks to Michael Raisch, whose Tweet to me last night inspired this article.  Screenshots courtesy of Curbed and Entertainment Weekly.

Hi there!
James Lileks put in his two cents about the trailer today. He noted that the Hotel Astor was renamed for the film. Here’s a link to his site (always a good read):
http://lileks.com/bleats/archive/12/0512/052412.html

Chock full of anachronisms. Not only did Gatsby’s yellow Rolls Royce become a Duesenberg, but a Duesenberg SJ, which wouldn’t exist until a decade after the novel is set.

In one scene Gatsby is using a handset telephone, and some late 30’s model at that. Western Electric wouldn’t even introduce their E1 handset until 1927.