This Saturday is the final Summer Streets festival, when traffic is closed down from the Brooklyn Bridge to Central Park, along Lafayette Street and Park Avenue all the way up to 72nd Street. Get up early and enjoy a corridor of unencumbered walking and biking, with tons of activities along the way, from 7 a.m. to 1 p.m.

Since you’re walking around and don’t have to worry about much traffic, put our podcast in your ears! We’ve actually spoken at length about many destinations along this route. So take one of these shows with you and experience a little history right where it happened. [I’m reprinting this list from last year with recent additions.]

As always you can download it from iTunes or other podcast aggregators, or you may right-click onto the links below. You can also stream directly from our Libsyn site and can also listen to any of these episode on Stitcher Radio: 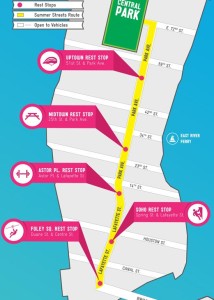 1. African Burial Ground
The Summer Streets route begins near Foley Square, partially situated atop the remains of an ancient burial ground belonging to New York’s original black population. Take a gander at the extraordinarily unusual monument to the west of the square. [Download]

2. Collect Pond
You’ll progress up Lafayette Street and past Collect Pond Park. Below you once sat the city’s source of 18th century drinking water and an eventual cesspool that had to be drained via a canal (that then became Canal Street). [Download]

4. Puck Building
Lafayette Street seems nice so far, right? The street is a bit of a destroyer however, lobbing off an original section of the Puck Building when the road was expanded south. Oh, but this former home of a 19th century satire publication is full of many surprises…. [Download]

5. The Astors
Lafayette Street was named by John Jacob Astor who developed many luxury properties in this area — and hundreds of far less luxurious ones everywhere else. To your right above 4th Street is the old Astor Library (which today houses the Public Theatre) and to the north is the great Astor Place. So why not learn a little about the family? [Download]

6. The Apple Orchard at 11th Street (featured in ‘The Grid’)
The path now moves from Lafayette to Fourth Avenue. At 11th Street, notice that the street doesn’t cut through to the west. Grace Church sits there like a fortress! In our show on the Commissioners Plan of 1811, we recount the tale of Henry Breevort’s apple orchard that once sat here and managed to break up the city’s grand uniform plans. [Download]

7. Union Square
You’ll take Fourth Avenue all the way to 14th Street, where you will be greeted with one of New York’s most popular parks. Union Square used to be an oval and also the centerpiece of high society in the mid 19th century. As you begin your walk up Park Avenue South, take note of the petite sculpture of the namesake of the street where you began your walk — the Marquis de Lafayette. [Download]

8. Radio History of Park Avenue
Radio pioneer Lee de Forest experimented with sending sound signals from his laboratory on Park Avenue and 19th Street. It was from here that the first music was broadcast, received by a radio operator at the Brooklyn Navy Yards. That’s just one of a few amazing stories in our podcast on New York’s role in the development of the radio. [Download]

9. Park Avenue Tunnel (featured in ‘New York’s Elevated Railroad’)
As you enjoy your stroll up an empty Park Avenue, take note of the now-carless tunnel that plunges under the street at 33rd Street. The origin of this strange underground detour stretch back to the 1830s and the early days of the New York and Harlem Railroad. I retell the story of this former ‘open sore’ in our show on the New York’s Elevated Railroad. [Download]

10. Grand Central
Oddly enough, one of my favorite parts of Summer Streets involves the one moment you’re blocked from the sun. With no vehicles, pedestrians are able to walk around the classic structure via the elevated road. You can also closely check out the statue to Cornelius Vanderbilt, who changed the city forever with his railroad and ferry acquisitions. [Download]

11.  Met Life Building (Pan Am Building)
This is probably the structure you’re the least excited to see, but hopefully, in our podcast (a personal favorite of mine), we make a convincing case for giving this building its proper due. [Download]

12. St. Bartholomew’s Church and Schaefers Beer
The beautiful St. Bart’s on Park Avenue and 51th Street was built on property that once held the Schaefers brewery plant. You can hear all about it in our show on the history of New York City’s glorious beer history. [Download]

13. Steinway
The sleek Seagram Building on Park Avenue and 52nd Street is definitely eye-catching, or at least that weird union scab rat statue in front of it is. But a hundred years before the Seagram was even built, Henry Steinway had a huge manufacturing plant here, where he delivered to music-minded New Yorkers the finest instruments in town. The factory was almost destroyed during the Civil War Draft Riots. (You’ll have to listen to the show to find out how they saved it!) [Download]

1 reply on “Let us be your Park Avenue Summer Streets companion!”

As of last week the African Burial Ground Memorial was closed to the public for repairs, just FYI.