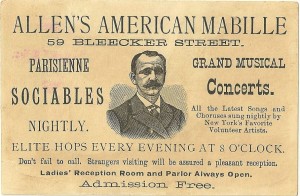 “There are no lower outcasts in New York than the women who nightly creep out of the darkness and swarm the pavement of Bleecker Street…” L. Hereward, Eclectic Magazine, 1893

Sure, the Bowery was a rough and rowdy avenue, but one looking for more alternative adventures in the late 19th century might have found themselves somewhere along Bleecker Street. The college bars and cafes which inhabit the street now seem practically chaste compared to some of the dives once housed there.

At 59 Bleecker Street, for instance, one could find The Allen’s American Mabille, a ‘Parisienne’ style dance hall and den of prostitution that survived several dozen police raids — police headquarters was literally a block away — and made Allen one of the infamous proprietors in Manhattan, responsible for “the ruin of more young girls then all the dive keepers in New York.” [source]

It joined a collection of prostitution houses along Bleecker and east of Washington Square Park, so many that the neighborhood was sometimes known as Frenchtown, and not because of the fine cooking.

But American Mabille and the other ‘Paris’ houses, from all appearances, specialized in heterosexual couplings. A few places on Bleecker catered to male encounters and often of the most flamboyant kind, if accounts are to be believed. (Keep in mind the hysteria of the late 19th century press!)

The most famous of these was The Slide at 157 Bleecker Street, a basement dive filled with men in drag, horrifying proper New Yorkers with clientele “effeminate, degraded, and addicted to vices which are inhuman and unnatural” according to contemporary scandal sheet descriptions.

The Slide is somewhat well-known today as it shares the same address as rock venue Kenny’s Castaways.

Down the street from The Slide was the Black Rabbit at 183 Bleecker Street, another dive with a mixed clientele, known for scandalous sex shows, from the likes of the ‘Jarbean fairy’ and a female ‘sodomite for pay’. Like many of the others, it survived with sizable bribes to the police. The bar even scandalized thieves. In 1901, a reporter from McClure’s Magazine entered the Black Rabbit with a pickpocket who replied, “[T]his is dead tough. I wouldn’t allow this, ‘f I was the chief….I like an open town where everything goes all right enough, but I’d douse the glim here.” (douse the glim = turn out the lights)

Nearby The Slide was Frank Stephenson’s Black And Tan at 153 Bleecker, “a place of bad repute“, specializing in mixed race heterosexual encounters, something most likely frowned upon even in many low-class Bowery dives. The phrase black-and-tan was used to describe other halls where people of different races drank and caroused together.