Hogwarts of Washington Square: The beautiful and supremely ostentatious University Hall at the northeast corner of the park, circa 1850. [NYPL]

PODCAST They once called it the University of the City of New York, an innovative, non-denominational school located in a intellectual castle on the northeast corner of the Washington military parade ground. Today it’s better known as New York University, one of America’s largest private schools of higher education, inhabiting dozens of buildings throughout the city.

Find out more about its spectacular and sometimes strange history, from the inventors among its early faculty to some of the more curious customs among its 19th century student body. But the story of NYU is often defined by its growth, the need for expansion, and conflicts with the community.

Featuring: The prisoners of Sing Sing Prison, the Hall of Fame for Great Americans, the usual controversial plans of Robert Moses, and a strange custom known simply as The Bun.

The Bronx campus of New York University was an attempt to affix the school into a more traditional campus. And a bucolic one too, from the looks of  this postcard. [NYPL] 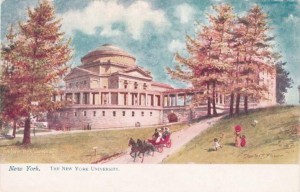 The silver casket (pictured here in 1915) which contained the remains of the coveted ‘Bun’. Who holds the Bun today? [Courtesy the NYU archives] 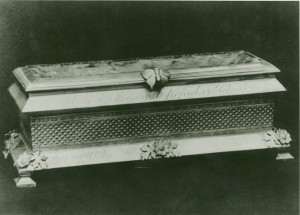 New York University’s Bronx campus became a critical training facility during the World Wars. According to the caption, this is a picture from 1943 of a ‘camouflage class’, with “men and women are preparing for jobs in the Army or in industry.” [LOC] 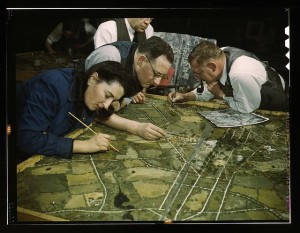 A 1948 model of the building that would become Vanderbilt Hall. Its construction on the northwest corner of Washington Square Park created tensions with the residents and activists of the neighborhood, one of many such conflicts NYU face in its expansion plans. [LOC] 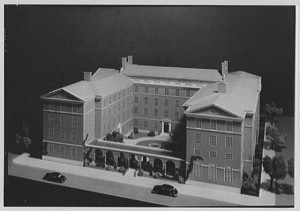 2 replies on “New York University: A noble idea takes root in the Village, a school for the metropolis, but not without growing pains”

NYU has always had tense, and even acrimonious, relationships with residents of Greenwich Village. Now the university has an expansion plan that would, in essence, obliterate part of the neighborhood over the next two decades.