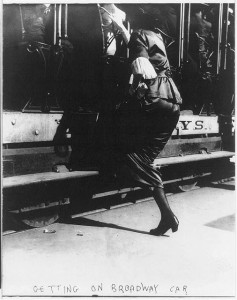 A lady in a relatively normal skirt boards a Broadway streetcar in July 1913. Now imagine trying this in a hobble skirt! (Courtesy Library of Congress) 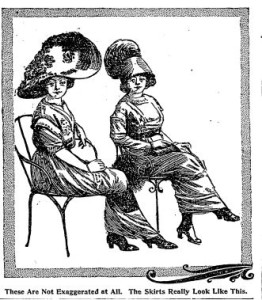 A serious cry (mostly from men) rang out through the city one hundred years ago about the ever-expanding transit system and the scandalous style of women’s skirts. Were frocks getting caught in doorways? Were dress lengths causing women fall down stairs?

Perhaps, but that wasn’t the issue. The latest fashion trend, the hobble skirt, was slowing the progress of women onto and off of streetcars, causing frustrating delays.

The Parisian-style hobble skirt, with its bunched hem near the bottom to create a mermaid-like appearance, made its appearance on New York streets in the early 1910s. The new gowns required ladies to walk more elegantly and, thus, more slowly, a throwback to the Victorian gait. “[T]he mannish stride of the women of today was taken for granted as a permanent thing. Nobody expected it to change, for nobody saw the hobble skirt on the horizon.” [New York Times, January 1912]

After a millenia of unfettered skirts, this new silhouette must have seemed positively strange to elder fashionistas.

“‘The hobble’ is the latest freak in women’s fashions,” warned the Times upon their arrival in 1910.  “The hobble skirt suits none. But many, too many, women will wear what the fashion authorities decree.”

Aesthetics aside, the hobble skirt created a practical problem. While measured, graceful walking might be fine on Ladies Mile or strolling along Fifth Avenue, it was an encumbrance upon the ever-moving streetcar system.

An executive of the Interborough Transit System (New York’s first subway operator) grumbled to the Evening World in 1912 about the extra burden the hobble skirt created upon city transportation and called for the fashion trend to be abolished. 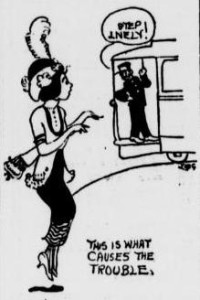 “Often hundreds of people will be forced to stand aside patiently waiting for some women to raise her skirts sufficiently to allow her to step into the car,” said George Keegan, general superintendent.

A special ‘step-less’ car had even been designed with the fashionable lady in mind. The first of these “hobble-skirt, hygenic, fool proof” cars debuted on the streets of New York in the spring of 1912.

Meanwhile, underground, fashionable ladies were finding difficulty clearing the gap between the platform and subway cars. “Nearly all of the accidents in the subway are due to the fact that women wear hobble skirts,” said Keegan, a claim which could not possibly have been true.

The Pennsylvania Railroad, fearful of complaints and potential lawsuits, acted upon the crisis the following year by requiring train conductors to note skirt styles and “height of heel” and report all data to their central office. “If women passengers on the Pennsylvania Railroad insist on wearing such mantraps, or rather womantraps, as hobble skirts and high heels they cannot hold this company responsible for accidents which may happen to them,” claimed the railroad.

But all these railroad executives really needed to do was simply wait — trends subside, to replaced with other, more objectionable wear.

By the time Mr. Keegan was complaining about the hobble skirt, the Evening World fashion section was already clutching its pearls in disbelief about another fashion abomination. “The high note of feminine folly has been struck.  The harem skirt is to succeed the hobbled horror which has made women hideous and ridiculous during the past year.”

But, leaving taste aside, at least you could ride the subway in a harem skirt!

Illustration above is from the August 9, 1912 edition of the Evening World which accompanied the Keegan article

That’s a nice assemblage of information, thanks!

In some ways, it doesn’t seem like fashion’s changed all that much between 1900 and WWI, but there were a lot of these little trends, at least in the cosmopolitan, big cities.