The rapid transitional personality of a New York City building tends to write over the juicier bits of its past. Will we remember CBGBs 20 years from now when it’s a fashion boutique? Do the college students down at the Palladium NYU dormitory in the East Village know what their building’s named after?

When Patrick Kenny opened Kenny’s Castaways in 1967 at 157 Bleeker Street, he certainly knew he was settling down onto the equivalent of an burial ground of early Village debauchery. And without obscuring the establishment quite seedy origins he would create a bit of history himself.

Patrons slipping into a bar at that address less than a hundred years before would be stepping into what the New York Press (a 19th Century news rag) called “the wickedest place in New York.” Being New York in 1890, I suspect there were a few places more ‘wicked’ in the city; yet The Slide won this notorious title for being a flaunting homosexual dive bar.

You can’t trust police blotters and morality crusader sheets like the Press to give an accurate depiction of what The Slide was really like. But even an attempt to peel back the hyperbole gives you a sight that would rival the bawdier Village gay bars of today.

Dive lord Frank Stephenson seemed to specialize in lubricating the underground fringes of society. His Black and Tan bar down the street from the Slide catered to non-white patrons who preferred the flirtation of ‘amoral’ white ladies (sometimes prostitutes, often thieves). The Slide went a step further, with open displays of men in drag, ‘one to three hundred people, most of whom are males, but are unworthy the name of men’, performing ‘fairies’ on pianos, and backrooms of male prostitution.

Homosexual behavior of any stripe would have been condemned in this era; such flagrant and open displays would have been unthinkable. The clientele were ‘effeminate, degraded, and addicted to vices which are inhuman and unnatural’. A bar today would be honored to be strapped with such description!

Flash forward almost 75 years. The Slide was closed down by police in 1892 and the building took on a host of different identities. In preparing for opening of Kenny’s Castaways, the Kenny family would find the basement cellars — with largely intact evidence of its use as a brothel — almost preserved. Many of the bars floors and fixtures hearken to the 19th century. What Patrick Kenny planned, however, would definitely influence the 20th. Kenny would return the space to its former glory as a raucous bar and host to a very different set of over-the-top characters, while leaving the basic layout of the bar mostly intact. 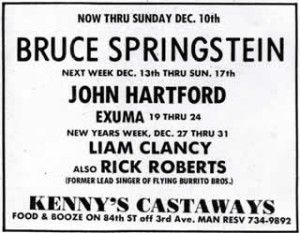 Instead of mincing drag queens, Kenny’s Castaways would host up-and-coming rockers and superstars longing to return to barroom performance spaces. Patti Smith, the New York Dolls, Blues Traveler and Aerosmith have all played Kenny’s worn stage early in their careers. Two Ramones, DeeDee and Joey, are purported to have first met at a Dolls show here in the 70s.

A young singer Bruce Springsteen performed for a week here in 1973 with his new band the E Street Band. Seven years later Kenny’s would hire a house band the Smithereens. Even today the bar hosts a mix of big stars and local cover bands, and all rather discreetly, at least in New York terms. The bar rarely advertises, yet everybody knows Kenny’s.

Patrick died three years ago, but the family continues to run it. This year is Kenny’s 40th anniversary. I can’t help but think that the ghost of Princess Toto sidles up to the bar every night to lord over the festivities with satisfaction.

The interweb is sure one strange place. Thanks to a truly obsessive Springsteen fansite, Brucebase, I was able to determine that the ad shows a Tuesday through Sunday residency for Bruce in December ’72, when the 10th was a Sunday. This was about a month before his debut, “Greetings From Asbury Park”, was released (he spent a good part of the following year playing Max’s Kansas City off of Union Square, including a show for the history books with Bob Marley and the Wailers on their American debut tour). And on the Thursday of the Kenny’s run, Springsteen and the not-yet-christened E Street Band did an afternoon gig…at Sing Sing! (Tough crowd, tough crowd.)

What’s interesting about the ad, though, besides the misspelling of his name, is the listed location of the club: “84th off 3rd.” Was this an northern branch of the Bleecker Street mainstay, or some weird and brief detour uptown? I’ve included a link to a show Yoko Ono (!) did at that spot in 1973, so it looks like some further digging might clear things up.

In Oct. of 73 Yoko Ono played the Castaways on E. 84th. A few doors down at Brandy’s I think a pre-Piano Man Billy Joel soloed at the same time. Brandy’s also had a comic by the name of Danny Goldman. There were 2 Brandy’s in Manhattan at the time. An issue of NY Mag. states that Brandy’s opened in 1979. Ain’t so.

From what I’ve read about Kenny’s Castaways, there were two locations, Bleeker Street and 84th street. What location did the New York Dolls play at?

I will make an attempt to clear things up…The first location of Kenny’s Castaways was on East 84th St. that is where The New York Dolls first performed, however, they also performed at the Bleecker St. location many times. There are several articles online referencing their uptown debut as well as the controversial filming at the downtown Kenny’s by Bob Gruen. The lease uptown was up in early 1974 and Kenny’s then moved to Bleecker St later that year. The Springsteen issue: yes Springsteen performed at Sing Sing in the afternoon on that Thursday and then that evening at Kenny’s. He was booked for the whole week. Yes, his name was spelled incorrectly and we are very sorry for that offense. We are so glad to be a part of the discussion. Thank you. The Kenny’s.

Dear Maria:
You are so right, I remember talking to one of the Dolls standing on the street outside at the 84th St. location, while Yoko Ono was grossing everyone out inside with her painful wailing she called singing! Thought my memory was playing tricks on me till I read your post.
David Carrell, Vancouver, Canada
May 31, 2011
Still alive at 64

I lived in Brooklyn back in the early 90’s & Kenny’s was my regular haunt. Pat & Tommy & Mike always took great care of us. I saw the Smithereens when Pat Dinizio was still alive. They were great. Good days. -JPB-

Some friends of mine were playing Kenny’s in 1972 but what I remember most was a Quasar City Car parked across the street. I waited there for hours to see if I could catch the owner but they never appeared.