When I was a teenager, one of many life missions was to one day write for the Weekly World News, the black-and-white supermarket tabloid which specialized in uncovering mutant, fantastical, and mostly unbelievable events being ignored by the mainstream media.

It began in 1979 with far less embellished intentions, focusing on celebrity gossip and sensational true crime stories.  But it quickly found its footing as a proto-Onion style poke at the National Enquirer, spending the 1980s with ever-heightening, baldly absurd headlines which often slathered a kernel of truth in layers of fiction. 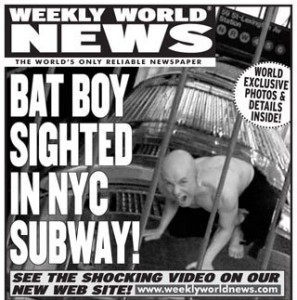 And then in 1992 came an extraordinary discovery in a West Virginia cave, a primordial mutant child the News called ‘Bat Boy‘, an instant success that eventually spawned a popular off-Broadway musical.  From then on, the Weekly World News has been an ever-escalating fanzine to the absurd, an outlandish rag of zany stories and doctored photography, often making unsubtle dings at current cultural events.

New York has been a repeated backdrop for many Weekly World News exposes, its landmarks battered and abused by a host of supernatural entities.  For his part, Bat Boy has been to New York on several occasions, once riding upon the top of a subway car to Coney Island “to get some of his beloved hot dogs.” In 2010, Bat Boy endorsed the enigmatic Jimmy McMillan (of The Rent Is Too Damn High party) for mayor.

The entire Weekly World News back-catalog is now available online on Google Books, and I recently spent a few too many hours perusing old titles looking for the best stories about New York City.  Little did I know of the number of spectacularly weird — and true! — events that have occurred here without my knowledge.  Click on the headers below to go the particular issue:

GIANT TURTLES
In 1997, the paper uncovered a nest of giant turtles in the New York sewer system capable of snapping off a man’s hand in a single bite.  One specimen was captured at a Bronx treatment plant and sent to the Bronx Zoo where it was declared patently ‘prehistoric’.

But where did these monsters come from?  “The Hudson River gets too much water and gates are opened to allow the water to flow into the East River.”

GHOST PRIDE PARADE
A gathering of phantoms terrorized socialites along Fifth Avenue in 2006 as they marched down the street in a parade, walking through traffic and alarming law enforcement.  A police barricade at 57th Street proved useless as the spectral community simply passed right through it.

“It was surreal. I saw a Civil War soldier, an ancient Roman, a cavewoman and other strange apparitions. There were even a few celebrities, like Laurel and Hardy and Mark Twain.” 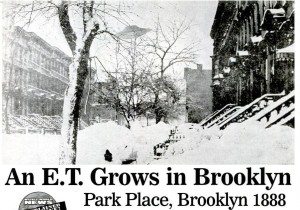 SAUCERS OVER BROOKLYN
The Blizzard of 1888 immobilized the city, responsible for the deaths of hundreds and shutting down almost every element of New York infrastructure. It was such a devastating storm that there could only be one cause — beings from outer space.

As proven in the photograph above, obtained by the Weekly World News in 2007 from a source at the Brooklyn Eagle, flying saucers menacingly hung in the air over South Brooklyn during the storm. “We were being tested,” claimed a representative from the government’s Unexplained Phenomena Bureau.  Apparently, we passed.

THE EASTER BUNNY
(pictured at top)
An unprovoked Easter attack in Central Park by an alleged “man-sized, floppy-eared creature” brought on a lawsuit by the victim’s mother. Perhaps the suit was settled out of court, for a paranormal expert is quoted claiming that “I seriously doubt that [the Bunny] would attack a helpless, unarmed child.” 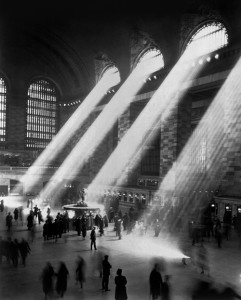 The Biblical rapture — where Christian faithful instantly vanish from the earth, to be taken to heaven — has already occurred, according to one 1999 article. The event took thousands of Christians during World War II. It offers as proof the extraordinary photograph of Grand Central Terminal to the right.

“According to a police officer who was cited as an eyewitness in one news account, rays of bright blue light came through the windows of the train station and singled out certain individuals.”

Strangely, the photographer of this iconic picture, John Collier, remained silent on this fact. Another conspiracy?

DUCKMEBA
It is particularly irresponsible of the city to cover up the deadly event which occurred on Coney Island in July 2007, when an ‘undulating amoeba’ with the head of a duck and webbed feet rose from the ocean and attacked people along the boardwalk.

The beast apparently destroyed the Cyclone — it was swiftly repaired — and viciously went after the Parachute Jump before its ‘viscous body’ evaporated before the eyes of stunned police officers. Certainly you remember Mayor Bloomberg’s lame story about this event being ‘an aberrant form of ball lightning’? Well, the News blows that lie right out of the water.

Below: A composite of the fowl creature. 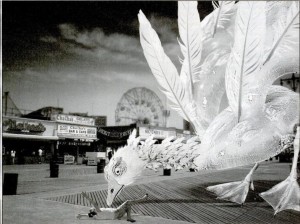 TIME-SPACE PORTALS
Anybody who lives and works in New York knows that there are moments where hours seem to pass in the span of mere minutes. Luckily, the Weekly World News over the years has found evidence of the city’s tenuous spot at the precipice of time and space.

An airplane which had disappeared over the Swiss Alps in 1972 suddenly reappeared over Manhattan in 1996, souls which had traveled through the dimensions, unaware of their otherworldly form.

Another portal appeared in the Tribeca neighborhood in 2007, when construction workers on Chambers Street fell victim to a tear in the space-time continuum, going from “real-time motion to moving at slow speed,” due to the dust of a white dwarf star that had somehow managed to get in their cement mix. The workers trapped in the space-time anamoly asked for overtime, “but they ain’t gettin’ it,” claimed their foreman. 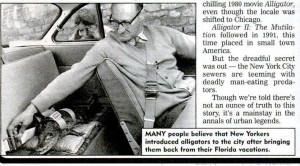 SEWER GATORS
A popular urban legend is given forceful historical credibility by the tabloid, exploring the long history of alligator sightings in the New York sewers.  In the 1930s, sewer workers were authorized to “shoot, poison or drown every one they could track down.” There were so many sightings in the 1950s, claims the paper, that sanitation workers purportedly demanded “protection from attacks.”

FRENZIED WOLFMEN
In 2002, a man viciously attacked his girlfriend in her apartment by biting her in the face. Or, as the News reported it, “gorged himself on chunks of her flesh!”

Clearly a telltale sign of lycanthropy, the News helpfully adds “The case recalls the mythical creature explored in folklore and in such Hollywood films as I Was A Teenage Werewolf.”

FISH MOBSTERS
The aquatic population of the East River is not immune from organized crime, as one Lower East Side resident discovered in 2007 when he awoke one morning to discover seven dead trout in his bed.

Officials tracked the crime to a deadly internecine war among the ‘trout, carp and bass’ of the river. “We think they have fishermen on the payroll,” said one detective.

But it’s not been all horror and doom for New York City in the pages of the Weekly World News. According to a 2002, article, the legendary Fountain of Youth was discovered underneath the streets of the city. One catch — it’s in a subway toilet.

Images and headlines above courtesy the Weekly World News, except for the Grand Central shot, courtesy New York Public Library

6 replies on “Ten strange supernatural events that have supposedly occurred in New York, according to the Weekly World News”

that’s not possible, even if some of these events had really occured, there must be a secret behind each one of them, just like how a magician can trick a whole audience with their eyes on him.

I have to agree with you, there is probably a logical explanation for these strange events. However, keep in mind, newspapers are not always 100% truthful about everything, and it is very likely that untruthful things were added to make the articles more appealing to readers.

I believe everything happens for a reason