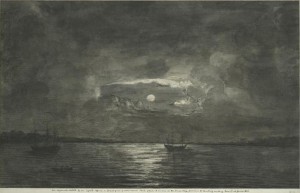 Above: The waters off Gravesend, Brooklyn, sketched by a British general in 1776. They too would have experienced the odd watery phenomenon known as ‘the Potato Patch’. [NYPL]

You may know the legend of the East River’s Hell Gate, a rush of violent waters borne from a tidal strait near Randall’s Island, so famous for wrecking ships that 19th century engineers took to dynamiting the surrounding rocks to alter the river’s flow. But the Hell Gate was not the only danger ships faced when traversing the waters around New York.

On the afternoon of October 24, 1912, two boys, Willie Taylor and Clinton Fox, playfully slipped out of their classrooms and tramped along the southern shore of Coney Island, near the edge of today’s Sea Gate neighborhood. Fox’s mongrel dog jumped into an abandoned rowboat floating off the shore near W. 25th Street.  The boys, already primed for mischief, climbed aboard, grabbed the oars and began paddling away.

They unwisely decided to steer toward the western tip of Coney Island, towards the lighthouse and Sea Gate’s most popular landmark of the day, the Atlantic Yacht Club.  They suddenly hit violent, churning seas created by a ‘strong ebb tide and a stiff wind’, and the boat smashed against a pier. Willie was thrown from the boat and eventually washed onto the shore unconscious.

But Clinton and his dog were swept back into the inescapable, twisting waves, never to be seen again.  Near midnight, the damaged rowboat eventually reemerged ashore with no trace of Clinton Fox but his shoes. [Above: a photo of Clinton Fox from the front-page Evening World story, next to the banner ‘BOY SKIPPER GAVE UP LIFE FOR CANINE CREW OF ROWBOAT‘]

Fox was one of several deaths caused by the curious water occurrence off the Sea Gate shore known as The Potato Patch, a one-mile long watery stew of twisting currents near a row of jagged rocks and old piers, where Atlantic Ocean waters meet those of more tranquil Gravesend Bay.  A ‘peculiar rip‘ with a benign name, the choppy currents were a constant vexation one hundred years ago, “a miniature maelstrom where scores of small boats and boatsman have come to grief.” 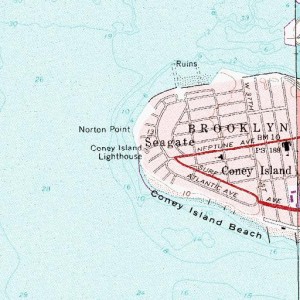 A potato patch is an old nautical name for rough, choppy waters near a shoreline.  There is a similar occurrence in San Francisco also called the Potato Patch Shoal (watch video of it here) that frustrates ships and surfers to this day.

At left: location of the Brooklyn Potato Patch, off the coast of Sea Gate and the Coney Island beach.

The patch could overturn small boats and submerge their crewmen before anyone on shore could take notice. The Sun claimed in 1912 that it had an “unenviable record for boat mishaps and drownings.”

The area along the western portion of Coney Island had become more residential by this time. Once called Norton’s Point, a rowdy getaway popular with the likes of Boss Tweed, it had been redeveloped in the late 1890s as the respectable residential community of Sea Gate. The Atlantic Yacht Club operated as an upper-class alternative to the amusements of Coney Island further east, and, in fact, does so to this day.  All of this served only to increase small-craft traffic along the shore, particularly sporting and recreational crafts.

On March 1914, two men disappeared into the waters when their canoe was pulled into the tidal disturbance. The New York Times reported “it is feared that their boat was overturned in the rough water known as the potato patch.”

The effect of the patch were greatest in the late afternoon when the tide came in. A 1910 swim meet, delayed by only an hour, unceremoniously ended at the treacherous tidal scar. “[W]hen the swimmers came to it … they found in it their Waterloo, as not even a rowboat could pull through it with the current and wind that prevailed.”

Bearing witness to many of these disasters was an operating station for the Marconi Wireless Company, famous for its role in picking up messages from the RMS Carpathia after the sinking of the Titanic. And also Its most famous operator was David Sarnoff, later the founder of the Radio Corporation of America (RCA).

I found references to the Potato Patch well into the 1920s.  I’m sure the waters in this area are still turbulent to this day; however they are likely no match for modern vessels. It does not appear to have caused many injuries after this date. It’s also doubtful that children are jumping into random rowboats anymore.