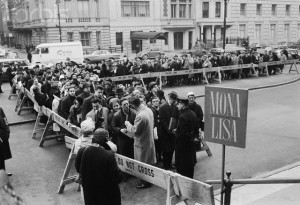 Mona mania: New Yorkers line up outside the Met for the hottest ticket in town in 1963

Leonardo da Vinci‘s stoic portrait came to America fifty years ago this month, a single-picture loan to the United States (as a special favor to Jackie Kennedy) and accompanied by AndrÃ© Malraux, the French Minister of Cultural Affairs. The first stop was the National Gallery in Washington DC, where over a half million people spent hours in line to gaze at the famous smile.

On February 7, 1963, she made her debut to the public at the Metropolitan Museum of Art in the medieval sculpture hall, for a month-long exhibition that would become one of the museums most attended shows in history.  On that first day, thousands lined up outside in the freezing cold to catch a glimpse of the iconic painting; the first in line, a taxi driver named Joseph Lasky, got there at 4:30 in the morning.  By week’s end, already a quarter of a million people had visited the museum to see the Italian masterpiece. 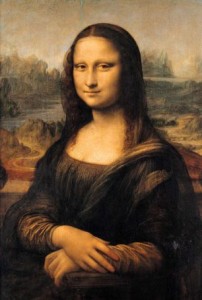 Accommodating such a famous painting required some unprecedented changes in protocol. As a favor to the two governments, no admission fee was charged to view the painting, and weekday hours were extended until 9 pm each night.

Thousands of schoolchildren crammed the museum every morning, funneling by the modest-sized painting in a daze. Museum director James Rorimer told the New Yorker, “The dirt we expect, from them and everybody else! The accumulation of dust from scuffling shoes! We’ll have literally balls of dust.”

From reports, it sounds like they got the dust and air quality under control. The painting was secured by bulletproof glass and a couple Secret Service agents.  But the museum sprinkler system almost created an international incident by nearly destroying the painting in an unplanned shower.

According to a memoir by former museum director Thomas Hoving, he arrived at the museum storeroom one morning to find people frantically scurrying around with towels.

“No one ever discovered why, but some time during the night one of the fire sprinklers in the ceiling broke its glass ampoule….The Mona Lisa, according to the Louvre official, was ok.  He told me that the thick glass covering it had acted like an effectiveâ€¦raincoat.”

That incident was never leaked to the press. Actually, this would have been a good time to conceal something from the media as there was a newspaper strike at this time, shuttering many publications.

By the time the painting was packed up aboard the US United States for her journey back to the Louvre, the Mona Lisa had been seen by  well over one million people. According to the New York Times, the museum was able to identify the one-millionth visitor — one Arthur Pomerantz of New Rochelle — who was given a reproduction of the painting and gifts for his children.

1 reply on “Another art anniversary: Mona Lisa comes to New York! And she’s almost drowned in a sprinkler malfunction”

When I was in Paris 2005, I could not visit the Louvre. But the Louvre came with sound recording equipment, which were kindly provided by the French. Found the “Mona Lisa” and began recording background sound created numerous visitors who came to see the masterpiece. The logic was simple. Allow myself to be noted that any masterpiece has the property of highly structured information field. Man – this is also, at its basis, the field structure. There is a contact of two field structures – human and masterpiece. This is probably the power of art. The sounds published the people who were in the masterpiece (talk, the shuffling of feet, etc.) were very valuable to me, they were correlated associated with him. Subjecting these records complicated transformation process, I managed to get some incredible sound. Many are led into shock – these sounds there is a clear identification with the portrait of “Mona Lisa.” Similar records I’ve made in the famous sculpture of Venus. As a result, based on these records, I had three works – “Knowledge”, “Flow” and “Communication”.