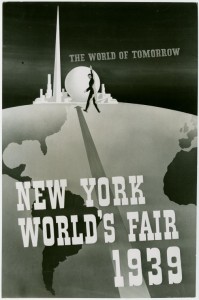 The Museum of the City of New York‘s new exhibition “Designing Tomorrow: America’s World’s Fairs of the 1930s” examines the aspirational vision of the American future in the automobile age, and the use of a mostly-defunct style of public exhibition as a way to sell that vision.

There were over two dozen World Fairs in the 1930s, several of them in the United States. (The last American Worlds Fair was in New Orleans in 1984.)  While the MCNY show does feature artifacts from some of the other American shows (Dallas, San Diego), it mostly focuses on the biggest and most influential of these events — the 1939-40 exhibition held out in Flushing-Meadows, Queens.

The Flushing-Meadows extravaganza found optimism in all facets of modernity, from the eagerly awaited expansion of automobile culture to the slickness of modern design infiltrating the middle-class household. The MCNY exhibit is arranged by themes, using prints and dioramas to illustrate what exhibitors thought the future would bring.

Below: A pretentious introduction to the General Motors exhibit Futurama which delighted audiences with a miniaturized depiction of the future (circa 1960) designed by Norman Bel Geddes

Railroad cars transform into rolling luxury hotels. Home conveniences emerge from an industrial horizon of chemicals and plastics. The privileges of living modern even mutates the private home itself, as rooms take on new shapes and purposes to accommodate future conveniences.  In a way, fair exhibitions predicted the non-traditional household; they just assumed it would be the house itself that would change, not the nuclear family residing within it.

Attendees at the fair would have seen their entire reality methodically dissected and upgraded as they wandered from one corporate pavilion to the next. “Designing Tomorrow” leaves out most of the camp associated with World Fairs to illustrate the cold, beautiful and desirable efficiency exhibitors hoped would be associated with their products.

I’m sorry, it leaves out most of the camp. My personal highlight of the MCNY show is the return of Elektro, a brawny, golden robot by Westinghouse who became a spokesman of a product-consuming future. He even smoked cigarettes like all of us would certainly be doing in the upcoming years.

Below: The golden boy in all his mechanical masculine glory

The most powerful objects on display are actually its collection of early fair mockups, drawings of pavilions even more bizarre than those that were built. Be sure to search out an early suggestion for the entrance to the Flushing-Meadows fair, a gigantic Roman centurion that would have been the tallest thing standing in the entire borough. You’ll also see a breathtaking early vision the U.N. Headquarters by architectural wizard Hugh Ferriss.

There are examples of some items that would eventually invade American homes, including a gorgeous looking toaster. But who wants toast when we could have had a smoking robot?!