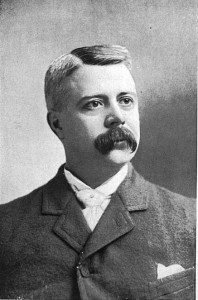 How did New Yorkers know to panic over the weather in the 19th century? How could they know to run through the streets in terror at the upcoming snowpocylpse/blizzardtastrophe if there was no brightly colored Accuweather radar or a friendly weather person with perfectly coiffed hair?

In the 1880s, New Yorkers turned to one man — the Brooklyn-born Sergeant Elias B. Dunn (at right, with his dashing moustache, 1902).  He was so trusted for his weather predictions — more accurate than an almanac! — that he was given the almost devout nickname of Farmer Dunn.

Nationwide weather forecasts had been steadily compiled by the federal government since 1814, but such  prognostications — or “probabilities” as there was sometimes called — were never taken very seriously until the late 19th century.

With the invention of the telegraph, a national signal office was established in 1870 and placed under the auspice of the Secretary of War as it was believed that “military discipline would probably secure the greatest promptness, regularity and accuracy in the required observations.”  Members of the military were enlisted throughout the United States to telegraph current weather conditions to the Washington D.C. signal office, where meteorologists could piece together the information and make more accurate predictions.  In 1890, this responsibility was moved to the Department of Agriculture.  (This is where Dunn got his unique nickname.)

New York’s weather conditions were assigned to Dunn, a decorated sergeant, and a four-man team, set up in a telegraph office located in the 1880s at the old Equitable Building at 120 Broadway. (In 1894, they moved to the taller Manhattan Life Building at 64-66 Broadway.)  The team would telegraph present conditions by using barometric instruments located on the roof.  They would then report statements from the D.C. signal office to the press.

Below: the original Equitable Building, headquarters for Farmer Dunn and his telegraph crew. The ornate structure famous burnt down in 1912 during a frightfully chilly evening. (courtesy NYPL) 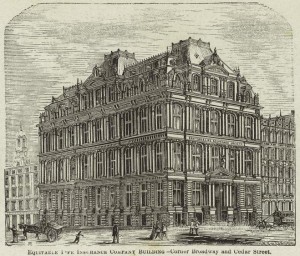 Dunn “is one of the very best known men in the city.” according to an 1894 New York Times article.  “His popularity, except with his legion of friends, is of a varying quality.”  Farmer Dunn would embody the weather for many New Yorkers;  his name would be cursed when it rained and praised on sunny days.

When his predictions failed, he was jovially mocked in the press. “ELIAS IS NOT A PROPHET,” declared the Times in 1895 after a sudden rain dampened spirits on Independence Day.

He was a man of science, eschewing folk traditions of predicting weather. “We made a list of all the farmers’ beliefs and the sailors’ beliefs, and we submitted them to investigation,” Dunn told the New York Sun.  “The result that we found was that they just don’t work out.  The study of weather is an exact science which cannot be left to squirrels and nuts.”

Dunn was on hand during one of the worst weather events in New York City history — the Blizzard of 1888, which struck the city just after midnight on Monday, March 12.  He and his team frantically sent telegraphs to DC and received no response, as most of the telegraph poles further south had been dismantled by the storm’s brutal winds.  In fact, it was only when he received a message from London — via the Atlantic Cable, buried under the ocean — that he realized the full impact of the blizzard. 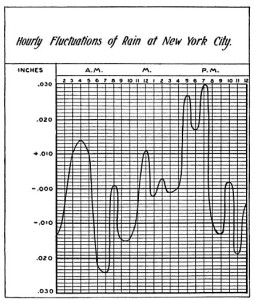 Later in life, Farmer Dunn became a published author, spilling his meteorological secrets in books such as “The Weather and Practical Methods of Forecasting It.”  He must  have inspired an entire generation of buddy weather enthusiasts, describing technical terms in a plain manner and even recommending equipment.  For instance, if you were looking for a polymeter (it “gives the relative and absolute humidity”), Dunn recommends purchasing one from “Gall & Lemlike, 21 Union Square.”

At right: An illustration from Dunn’s book, 1902

He also became a popular newspaper columnist, distributing such wisdoms in 1900 as “the popular idea that the spots on the sun produce excessive heat on the Earth is erroneous.” (source)

It seems he also got into the “moving picture” business, although I can find no other information on this other than the fact that he sued Thomas Edison in 1900!

Later in life, Farmer Dunn ran as a Republican for a seat in the U.S. Congress. He was touted for his six-word platform: “Americanism; local option; no entangling alliances.”  He lost, which he did not predict.  The weather guru died in 1943, enjoying many years of retirement in Miami.

1 reply on “Before Al Roker and Sam Champion, there was Farmer Dunn, New York’s weather guru of the late 19th century”

Your blog is wonderful. My blog, The Gang from West End enjoys reading it…….www.sharonhazardauthor.com
This week they posted an event held in the Tiffany Studios in 1913….It was called the Egyptian Fete.