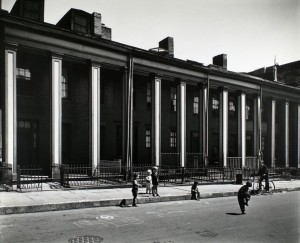 Children while away the days in front of 43-49 Willow Place in Brooklyn Heights, 1936. These buildings, known as Colonnade Row, were built over a hundred years before this picture was taken. And they still look pretty much the same today! Photo by Berenice Abbot. (courtesy NYPL)

Carded: The evolution of the New York driver’s license, including some early learner’s permits from the early days of the automobile.[New York Times]

Signs of the past:  If you get a kick out of seeing old historical markers along the side of the row, you’ll want to check out Forgotten New York’s survey of old markers (many of them long gone) of obscure historic sites in Queens. Including a former home of DeWitt Clinton! [Forgotten New York]

Hello, Yellow Brick Road: The History Chicks podcast turn their attention to the history of L. Frank Baum and the creation of the Wizard of Oz. [History Chicks]

The story of Vivian Gordon: A woman found murdered in Van Cortlandt Park: how a shocking crime that would circuitously lead to the resignation of Mayor Jimmy Walker. [Smithsonian]

Matinee at the Mayfair: Yet another old building comes tumbling down in Times Square, this one with a marvelous film history. [Jeremiah’s Vanishing New York]

We’re No Angels: Scouring the old baptism books in the Trinity Church archives has led to a surprising find involving one of Hollywood’s greatest actors. [Trinity Wall Street]