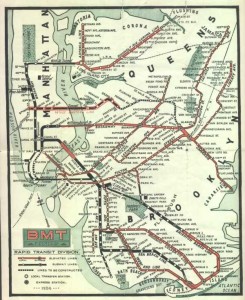 A subway map from 1924, illustrating the system created as a result of the Dual Contracts agreement.

After years of negotiations, false starts and lengthy arguments played out in the press, a group of greatly relieved businessmen entered the large hearing room of the New York Tribune Building (at Nassau and Spruce, where Pace University is today) and put their names to a series of documents that have come to be known as the Dual Contracts.

The beleaguered ceremony ran a half hour late, as a great many gentlemen crammed into the third floor meeting room to sign the official documents, stamped with gold lettering and expensively bound in morocco leather and colored ribbons.

With those signatures, the chaotic New York transportation system — with its fledgling subway and its miles of elevated lines — officially came of age that day — March 19, 1913.

“This makes March 19 a red-letter date on the municipal calendar,” declared the New York Tribune, in whose building the agreement was signed.  The Dual Contracts authorized millions of dollars of new tracks, more than doubling the system in size, from 296 miles of track to 618 miles!

Below: The buildings of Newspaper Row. The towered Tribune Building, in the middle, was the site of the Dual Contracts signing in 1913. 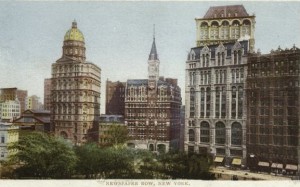 This seminal agreement in American transportation history is ‘dual’ because the city negotiated two separate contracts — one with August Belmont Jr.’s Interborough Rapid Transit Company (IRT) who operated the New York subway, and the Municipal Railway Company on behalf of the Brooklyn Rapid Transit (BRT), who ran most of Brooklyn’s transit system. 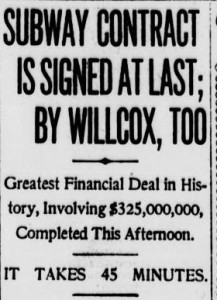 Under the agreement, the city would shoulder some of the cost of building new subway services — many into places where New York expected populations to rise in the coming years — and the two private companies would then lease the new routes from the city and profit from their operation.

At right: the headline from the New York Evening World

Essentially this gave IRT permission to operate into Brooklyn (once the domain of the BRT) and vice versa.  Previously, people arriving from Brooklyn to Manhattan had to immediately change trains once arriving into the new borough.

According to a report by the Public Service Commission later that year: “The Dual System will remove this abnormal condition and give the Brooklyn company a system of subways in Manhattan, by means of which it shall distribute its passengers through the territory south of 59th Street. Thus the present congestion at the Manhattan terminals of the bridges will be ended and the passengers from Brooklyn will be enabled to reach their destinations in lower Manhattan without change of cars or the payment of an additional fare.” [source]

As part of the deal, the two companies agreed to operate two new lines into Queens.  The importance of this particular part of the deal cannot be overstated.  The borough of Queens was just over a dozen years old by this time and still sparsely populated given its size. (Less than 300,000 people in 1910.)  With the arrival of the Queensboro Bridge in 1909, paired with new subway and elevated services provided by the Dual Contracts, the population of Queens would explode in the 1920s to well over a million.

And this didn’t just stimulate development there.  The deal brought a subway to the Manhattan’s Upper East Side and to the West Village, to most Bronx neighborhoods and down the Eastern Parkway in Brooklyn.  New home and apartment developments into those regions soon followed.

Below: City luminaries gather around to watch representatives from government and the two private companies sign the pretentiously bound contracts. (Picture courtesy NYCSubway, an indispensable destination for transit history.) 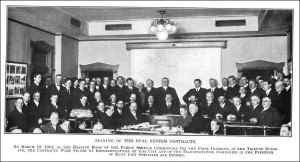 The Dual Contracts also created express and local trains, facilitating another great development in the history of New York — the arrival of midtown Manhattan as the heart of business and entertainment.

In all, the contract signed one hundred years ago today made the New York City transit system the largest in the world.  In fact, it was larger than all the rapid transit systems of the world at the time — combined (according to Peter Derrick’s excellent book on the subject Tunneling To The Future).

On a humorous note, the original contracts, bound as they were in thick leather volumes, were apparently quite heavy to lift.  The president of the IRT remarked, “I am glad that I have enough strength to receive these contracts.”

For more details on the Dual Contracts, please check out the second podcast on the birth of the New York subway system — Subway by the Numbers (and Letters)

3 replies on “The Dual Contracts: The New York City subway system gets a serious upgrade 100 years ago today”

Slight technical correction, the IRT and BMT (and later IND) all have the same Track Gauge. The Loading Gauge is different between the IRT and BMT/IND. This is what defines the width of the cars/right-of-way. There is further loading gauge difference within the BMT itself. BMT eastern division (Current J/Z) in Brooklyn cannot handle 75′ subway cars due to tight curve radius on Bdwy ‘L’. The section east of Bdwy junction is probably the oldest unrebuilt elevated in NYC. So R44/46/68 cannot operate on the J/Z. Thanks for posting this, and I enjoy listening to your podcast!!!

– Wow I did not know NYC subway branched off from two different companies. Also i found it interesting even till this day there are two different sizes of subway carts. I can kinda tell the different now.
– I figured this would directly deal with the industrial revolution and right before the roaring twenties because of the expansion of the subway system.
– This passage used primary sources such as pictures and maps that were published during those times.
– I wonder how did the MTA came into existence?

Kim, I think Mila Kunis is sooooo gorgeous, i am so happy that she's now the new face for Dior! And ooohlalala, those nail varnishes are GORGEOUS! I'd love the waterlily shade! I totally follow you on GFC, Bloglovin, Twitter, and Facebook! and my email addy is detgrhledlauia at gmail dot com . ♥ laura