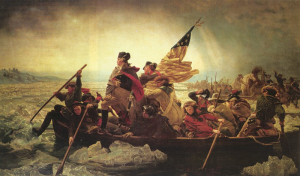 My American Revolution
by Robert Sullivan
Farrar, Straus and Giroux

Is it possible to see evidence of the Revolutionary War upon the present landscape of New York City?  Well, not really, but then that’s what makes “My American Revolution” by Robert Sullivan such rollicking, curmudgeonly fun. 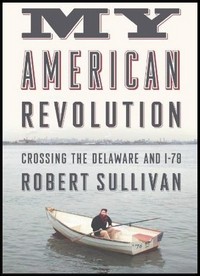 As he proved in his 2008 book ‘Rats‘, Sullivan has no trouble extracting stories from difficult situations. In ‘My American Revolution’, the challenge isn’t as unsanitary as rooting around for vermin, but it proves equally elusive — re-tracing the steps of America’s forefathers as their paths wound through New York and New Jersey during the Revolutionary War.

This region’s role in the war of 1776 is sometimes overshadowed by the grander battles of Bunker Hill, Yorktown or Lexington and Concord, and possibly with some justification — the earliest battles here were failures for the Continental Army.  But New Jersey provides some of the most profound imagery of the war, while New York, already a broken war-torn landscape by the end of 1776, will provide refrain of war’s end with George Washington‘s arrival in New York and his subsequent inauguration here as the first President of the United States.

Sullivan has written a travelogue of lost courses, attempting to follow the footsteps of Washington and others. More importantly, his interest leads him to the many others who have attempted this in the past.

‘My American Revolution’ is a celebration of Revolutionary War reenacting in all its forms, nobly wrought, pop cultural or otherwise. He begins with the greatest reenactment of all time — the famous “Washington Crossing the Delaware” by Emanuel Gottlieb Leutze, painted in a faraway gallery in Germany. 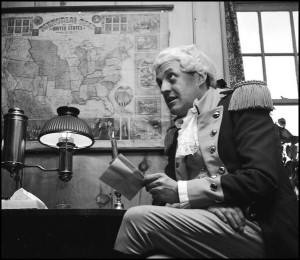 Its enduring appeal has influenced other artists, but more importantly has inspired decades of actual reenactment on the Delaware River.  Sullivan digs into the curious, sometimes cheesy tales of past faux George Washingtons, including one (the “flamboyant” St. John Terrell) who was accused of using the annual crossing emulation as a way to promote his line of movie theaters. At right: Terrell in 1956, courtesy David Hanauer.

The war has inspired an entire world of bizarre recreations, from a 1932 reenactment of Washington’s swearing-in in Bryant Park (using a model of Federal Hall) to an emulation of the Battle of Brooklyn using kids on bicycles.  Somebody once recreated David Bushnell‘s early submarine named the Turtle.  Given its shape, the recreated version was called the Acorn.  There are even reenactments of reenactments.

But the boldest reenactments are by Sullivan himself, who gamely attempts to walk in the footsteps of Washington’s Continental Army as they fled through New Jersey and later even tries to remount Washington’s boat ride into Manhattan.

Below: The miniature Federal Hall built in Bryant Park, 1932 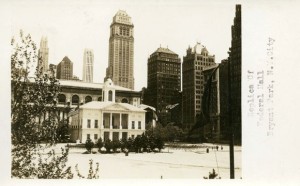 That last attempt at re-creating the past slams right into our modern era of homeland security. Throughout, Sullivan finds ways to connect with theses past events and the impossibility of ever re-doing them exactly due to an ever-changing city.

There is still solid evidence of the opening chords of American independence — from a flagpole in Brooklyn Heights to the streets of downtown Manhattan — but ‘My American Revolution’ mostly proves the most faithful reproduction is in the mind.

This book was recommended by a reader. (Thanks Mark!)  If you have a suggestion for a recent book relating to New York City history that we will consider for this fall, just send me an email at boweryboysnyc@earthlink.net

1 reply on “‘My American Revolution’: Imagining 1776 surrounding us”

Awesome! I always wonder why I don’t hear more about Revolutionary era NYC (we were occupied, for crying out loud – that’s dramatic). This goes on my shelf.