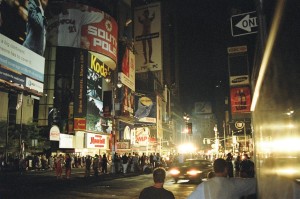 Photo above courtesy Drew Dies/Flickr He has a cool set of pictures from that day here.

Today is the tenth-year anniversary of the Northeast Blackout of 2003 which shut down power for most of New York City (and much of the Northeast) for almost 24 hours, with some areas experiencing outages well into the second day.

I was on the 35th floor of the Bertelsmann Building in the middle of Times Square. My co-workers and I traipsed down 35 floors under the glow of emergency lighting.

As ATM machines were offline, I had a grand total of $5 in my pocket, so I was unable to enjoy any of the cheap-beer and bbq fests that were underway in the East Village, as bars and restaurants rid themselves of items before they spoiled.  Down in the Lower East Side, it was a lonely night under candlelight, trying to tune in updates on my old battery-operated portable television.

We still didn’t have electricity the next day, so I walked the Manhattan Bridge over to Cobble Hill, where power had been restored, and there I hung out at my friend’s shop Halcyon the entire day, a place filled with Manhattan refugees that day. I returned over the bridge in the evening, but the Lower East Side still did not have power.

The heat was slowly driving people insane; I remember seeing a woman carrying groceries for some place a few miles away and almost collapsing on the street.  Had the power not returned then that evening at 10 pm, it probably would have gotten a bit messy in the LES. (It all seems so relatively manageable, of course, in light of the Sandy blackout.

Here’s a few more recollections from Twitter. If you lived in the northeast United States then, where were you ten years ago during the blackout?  Leave your recollections in the notes here, or on Twitter of Facebook:

@BoweryBoys at work walked home. Ran into some people on the way who were in a subway tunnel when it happened glad I wasn’t on the train.
â€” Abbie NYC (@AbbieLicious07) August 14, 2013

@BoweryBoys Stuck in New Brunswick, NJ. Spent the night at a friend’s house, then walked from Penn Station to Prospect Heights the next day.
â€” Sunny Stalter (@slstalter) August 14, 2013

@BoweryBoys At work, midtown. Emergency lights in stairwell out, so co-worker & I used cellphone glow until rescue by person with flashlight
â€” Amy Roth (@aimster215) August 14, 2013

@BoweryBoys Celebrating our son’s 3rd birthday. We never knew about the blackout until TV went off as our buildings have own generators.
â€” Des Brownlie (@Desb65) August 14, 2013

Some links on the blackout:

6 replies on “Blackout 2003: Where were you when the lights went out?”

Once the lights went out, I then called a girl from one of my college courses and went out on a first date with her. We drove around Bergen County, NJ looking for diner that actually had the lights. It was exciting and felt “dangerous” and was strange not to see the bright lights of Manhattan. We have now been married for 4 years and live in the UES.

Hi Joseph–
I got in touch with you on google plus but thought I’d try here as well. I’m a reporter from new york magazine compiling romantic stories from the 2003, 1977 and 1965 blackouts. I really liked your story and would love to speak with you further about your experience that night. My email is katy.schneider@nymag.com–I’d love to hear from you!
Thanks,
Katy

Was in a bar in lower Manhattan. After leaving there, hung out at another bar for a while. Eventually got on line for a ferry to Jersey City. Odd, they had electricity there. Took a bus from there to Newark Penn Station and then shared a cab with several strangers to Westfield. Never lost power at home.

My wife and I were relaxing in the Atlantic Ocean on vacation in Rio Grande, Puerto Rico. We came into our apartment, put on Liberty Cable, which carries CBS-2, and started laughing in relief that we wer missing the stress. About a half hour later, the power went out in our apartment in PR, and stayed out for 8 hours. We ended up having a very late, very sweaty dinner al fresco in Fajardo. New York karma has long long arms.

Ugh, so mad I missed this. I was with a bunch of other wide-eyed NYU freshmen at the 3rd North dorms, on 3rd Ave and 11th. We got up and running again fairly easily, but our fire alarms kept punking out for weeks afterward. There were a lot of nights spent in a confused and eventually irritated and jaded huddle, wondering if this was some kind of hazing. The folks who wandered up from St. Mark’s enjoyed our pajamas.

I’d gone to a job interview near the site where the Twin Towers once stood. After the interview, I I walked down Dey Street and stopped to look at some silver jewelry someone was selling from a table. Then I started to walk toward the subway, and the electricity cut off.

The funny thing is that had I not stopped to look at the jewelry, I would have boarded the subway–and been trapped in it. Instead, I tried to take a bus or cab. But the buses were packed and the cabs were taken. So I walked home–to Astoria. I’d worn a skirt and heels to the interview; fortunately for me, I’d packed a pair of Chinese mesh slippers in my bag. Of course, they were trashed by the time I got home, but my feet survived!

Along the way, I stopped for pizza at a place by the expressway in Williamsburg. Their ovens, like most, operated on gas, so they were able to serve throngs of customers–by candlelight. From there, I walked the rest of the way home. As I lived close to the river, I was able to follow the shoreline and didn’t have to navigate the pitch-black streets.