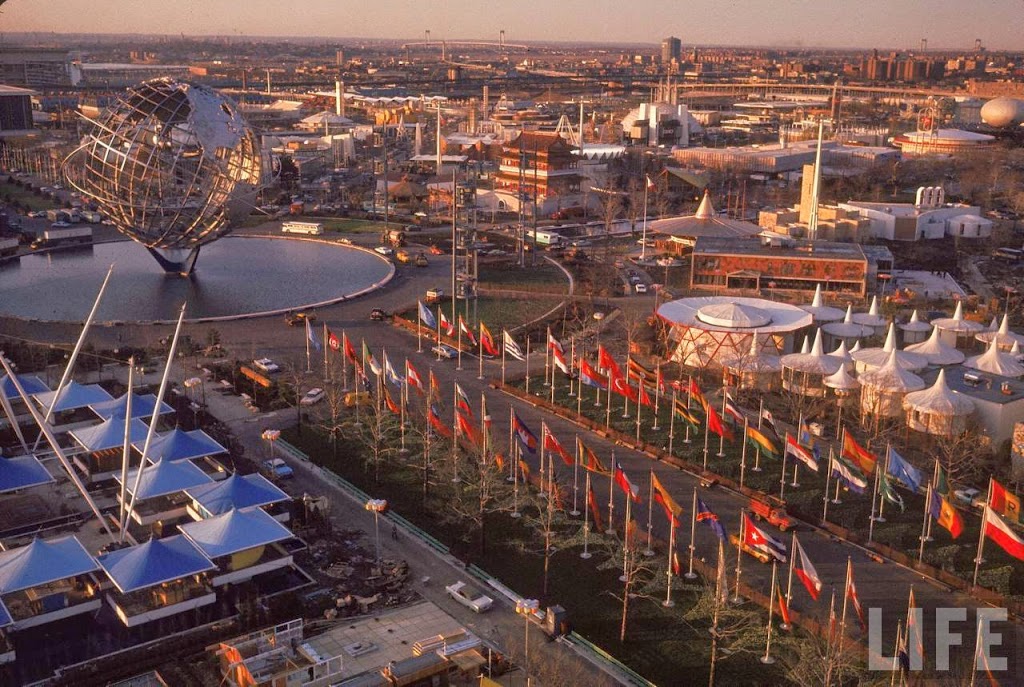 The World’s Fair of 1964-65 opened fifty years ago today!  We visited this unusual New York mega-event on the podcast a few years ago.  Give this show a listen to get a good introduction to our city’s strangest celebration of the future.  You can listen to it here or download it from the Bowery Boys Archive:

With its dozens of special pavilions, with its dazzling displays of technology and innovations, the World’s Fair of 1964-65 was an especially filmic event, with corporations making canned industrial films to promote their participation in the event.  Here’s a few notable (and often cheesy) examples:

Start with this introductory video, reported by Lowell Thomas, best known as the man who made Lawrence of Arabia famous. He was loosely depicted in the Oscar-winning from a couple years before.

This film on the Florida Pavilion could have been taken from an episode of Leave It To Beaver. “In this film, viewers learn about the dolphins that performed at the New York World’s Fair.”

The Sinclair Oil Corporation created its own Jurassic Park, Sinclair’s Dinoland.  After all, it was an oil company! Get it?  This attraction also had some of the most popular souvenirs.

Sinclair could fuel your Ford to get to the fair. So why not celebration the Ford Motor Company at its automobile fantasia — the Ford Motor Skyway, designed by Walt Disney!

For a continental view of the park, British Pathe made this amusing promotional documentary:

But this film is my absolute favorite, most likely meant for American classrooms — a celebration of the creation of the Unisphere!   It features Robert Moses, the Crystal Palace, the Eiffel Tower and an amazingly weird mod spider sculpture.

Here’s a good time, toe-tapping tribute to plastics, in a musical tribute by DuPont. “The Wonderful World Of Chemistry” was staged at the DuPont Pavilion 48 times a day.

Over at the Johnson Wax Pavilion, you would have experienced this unusual documentary short — To Be Alive, directed by Francis Thompson and Alexandr Hackenschmied (known as the cinematographer of Maya Deren’s Meshes in the Afternoon).  The following  year, the film was the Academy Award for Best Documentary Short!

Eastman Kodak also had a pavilion and released this film about how to take the best pictures at the World’s Fair.  Of course, today, this looks like the most Instagrammed film in history:

New York created a special “Subway Special” to get from Manhattan to the World’s Fair.   This became today’s 7 train and still one of the easiest ways to get out to Flushing-Meadows.  It also comes with a catchy tune!

And finally, here’s a selection of beautiful shots from Life Magazine, most taken in April 1964 in promotion for the fair:

The United States Pavilion featured a 15-minute film-ride on American history that culminated in its infamous Hall of Presidents (photographed by George Silk): 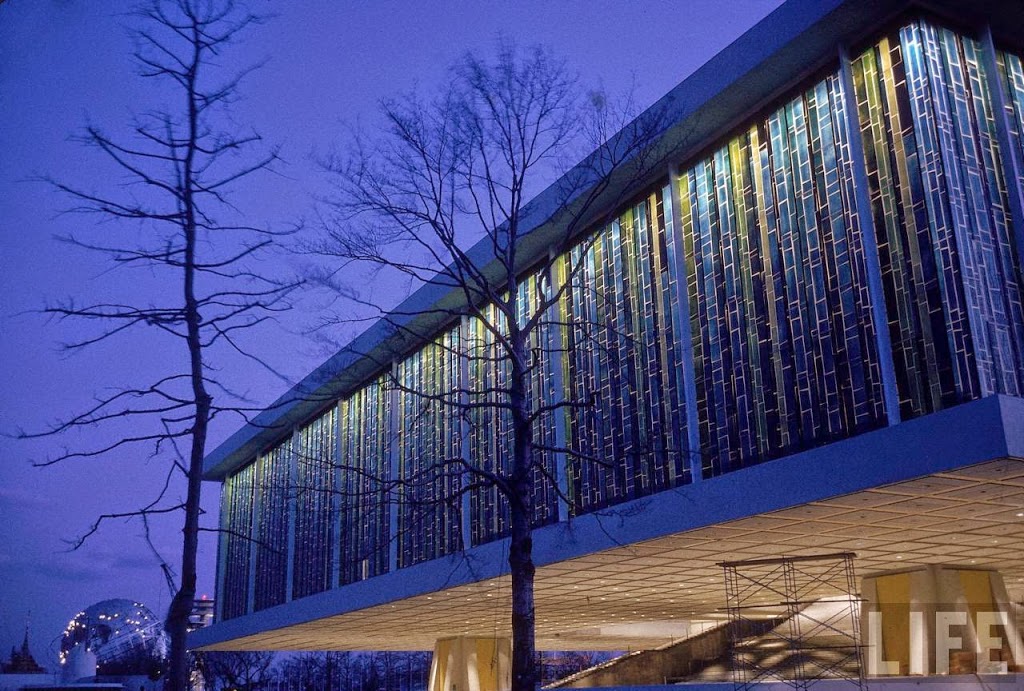 In another George Silk photograph, Masai tribesmen dance at the African Pavilion which featured caged lions, a museum of African artifacts, and a “tree-house restaurant” featuring the decidedly unauthentic “African Punch.” 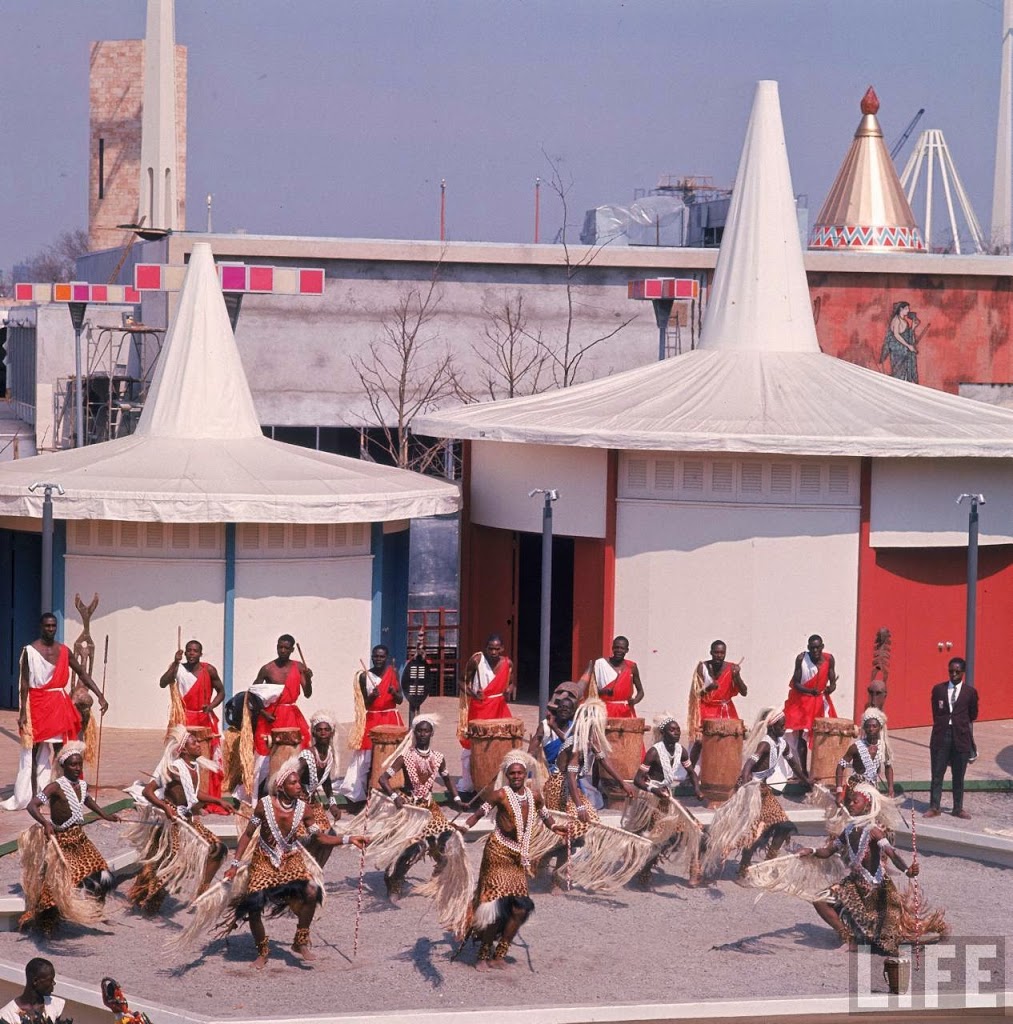 Several structures at night, including the Tower of Light and Walt Disney’s Progressland Pavilion (the domed building at top) for General Electric, “showing the role of electricity in the progress of man.” [Here’s the brochure.] 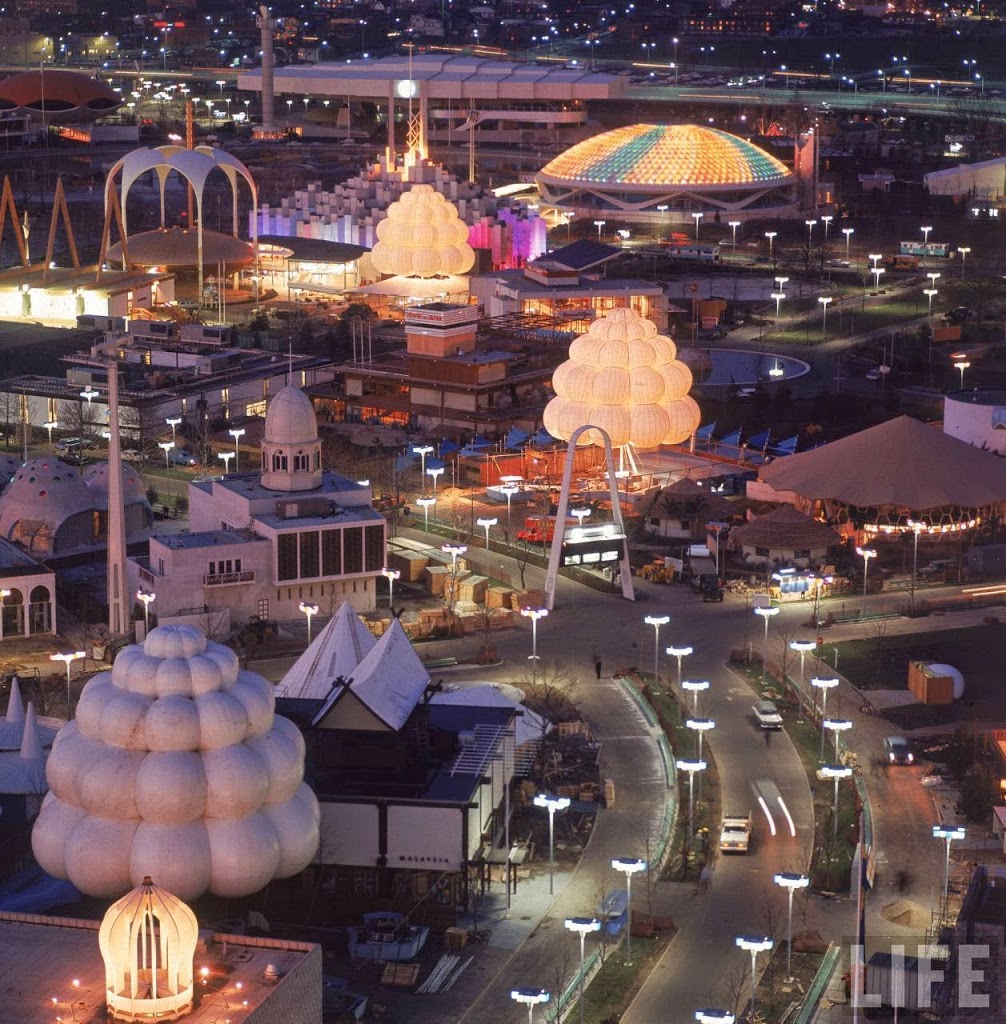 The fiberglass tent atop the New York State Pavilion‘s Tent of Tomorrow, the framework of which still stands like a ruin out in Flushing-Meadows. (Life/George Silk) 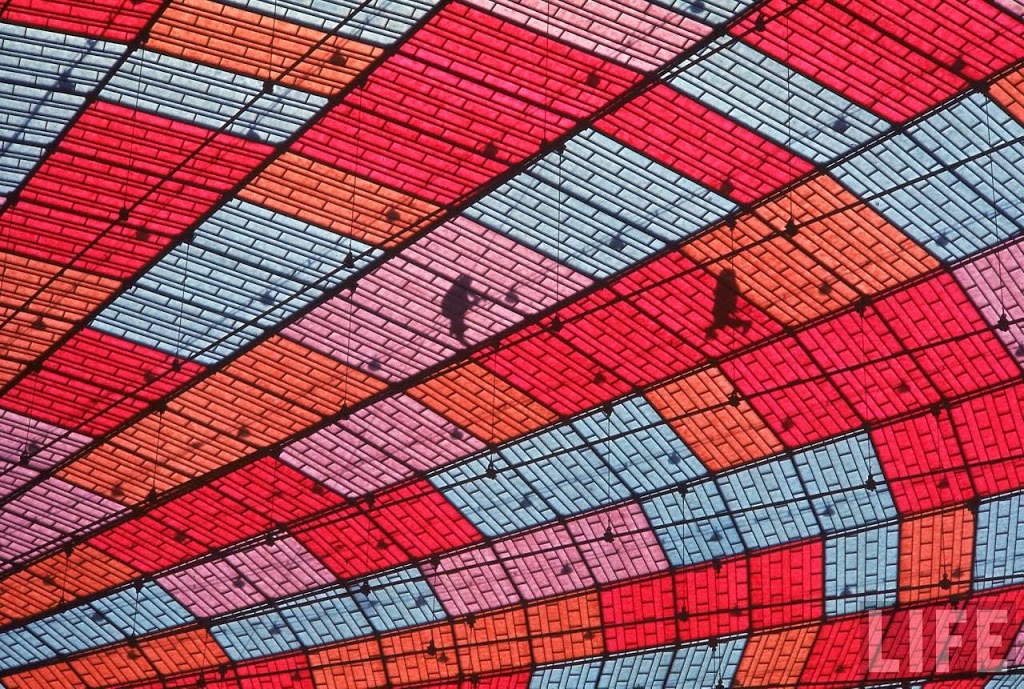