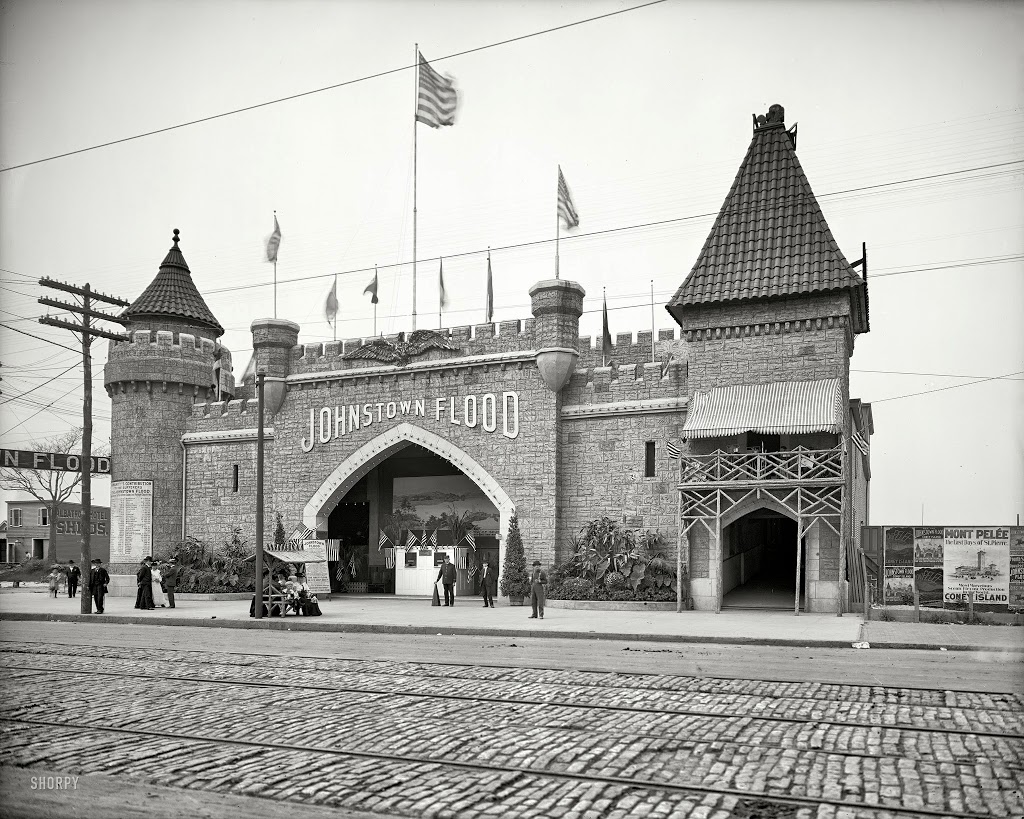 On May 31, 1889, a dam near the town of Johnstown, PA, collapsed after a brutal day of torrential rain, flooding the valley with 20 million tons of water and destroying everything in its path. There was virtually no escape, and 2,209 people died in the deadly flood.  Railroads, bridges and iron works were wiped off the map.  It remains one of the greatest disasters in America history.

Several years later, in 1905, on the Coney Island boardwalk, visitors could relive the danger in a bizarre reenactment set upon one of the biggest stages in the United States.  That’s entertainment!

The elaborate amusement, touted as “the greatest technical production in the world,” was only one of several theatrical presentations offering death and destruction, vivid dioramas of history and horror, for the pleasure of summer audiences.

These strange amusements were a precursor to the modern Hollywood disaster film, but they also served a more demonstrative purpose.  They provided Coney Island with a way to compete with Broadway, using new technologies and sophisticated stagecraft to recreate nature’s most horrifying scenarios.  Crowds marveled at the trickery, often rendering events with a macabre beauty. 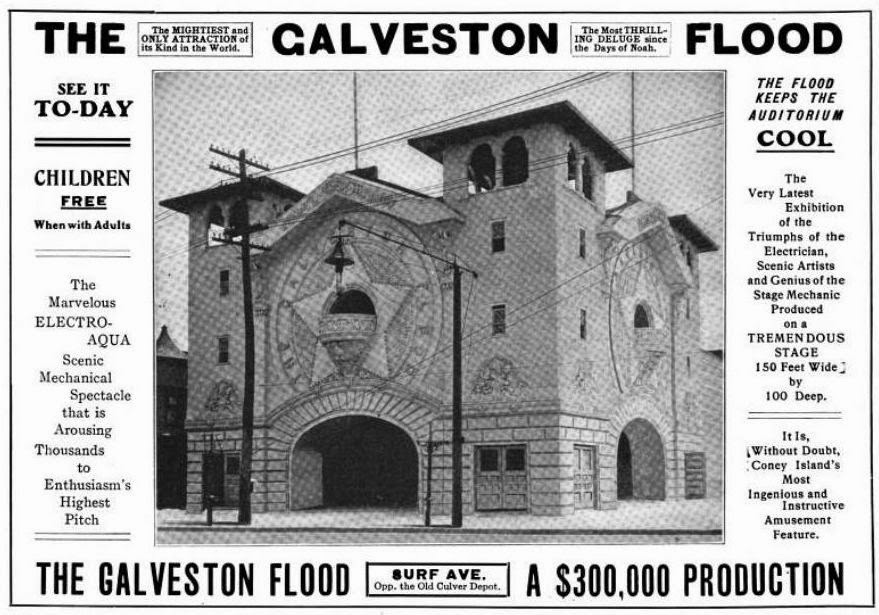 On Surf Avenue and 17th Street, one could visit the horror of the Galveston Flood, recounting the 1900 disaster (actually a hurricane) that killed over 8,000 people.  The Evening World declared, “How the very spirit of the horrible hurricane can be caught by mechanical and electrical devices is the secret that will make the Galveston flood famous.”

Down on Fifth Street, audiences delighted to a revival of the eruption of Mount Pelee, which killed almost 30,000 people in 1902.  Opening just two years after the disaster, the Pelee attraction was particularly luscious and comfy — “cooled by six big ventillators and ventillating fans run by electric motor” — as audiences witnessed the effects of faux lava catching houses on fire. [source]

Not to be outdone, in 1906, impresario Herbert Bradwell, the producer of the Johnstown Flood attraction, expanded the water and light effects to recreate Noah’s Biblical flood.  The Deluge was both cheap spectacle and a morality play in five scenes, employing a flagrant water and light show to retell the ancient Biblical story, from the construction of the Ark to a host of tableaux outlining a possible future of “universal peace.” [source] 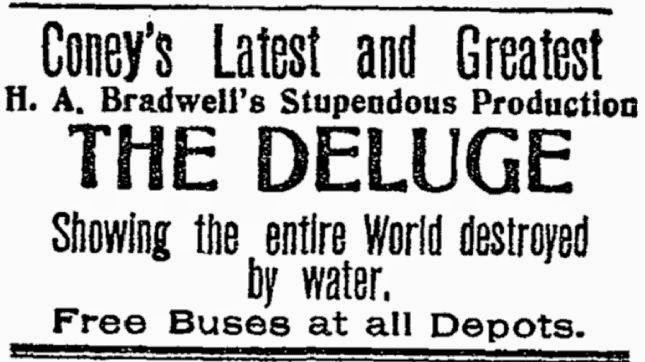 Coney Island’s most famous amusement parks certainly got in on the apocalyptic action.  Luna Park presented the thrill of fire-fighting with the 1904 show Fire and Flames.  Dreamland also joined the fray that year with Fighting The Flames where patrons could witness the horror of burning tenement.

Later that year, Dreamland replaced its fire fantasy with a vivid retelling of the San Francisco Earthquake, mere months after it killed almost 3,000 people and leveled the city.  The Earthquake featured a cast of 350 people within a stage creation of pyrotechnics and smoke effects, leveling the city on a nightly basis.

Below: Luna Park’s Fire and Flames and Dreamland’s Fighting the Flames were both featured in separate films.

Perhaps the most dazzling of the many death and destruction features were the various incinerations of the ancient city of Pompeii.

The first came in 1903 down near the Manhattan Beach Hotel with The Last Days of Pompeii, which nightly decimated the ancient Greek city, using a host of firework tricks and various maudlin theatrics. A year later, Dreamland brought the Fall of Pompeii, with a thrilling simulacrum of fire, ashes and lava. [picture source] 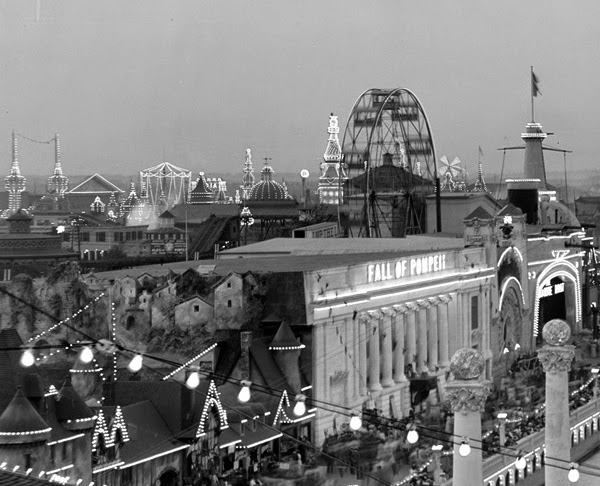 But in terms of the sheer amount of destruction imaginatively depicted, nothing could top Dreamland’s 1906 show called The End of the World, which destroyed all of mankind in an auditorium seating 1,200 people.

“The expulsion of Adam and Eve from Paradise and the destruction of the world by fire are the principal episodes in the production in which … more than a hundred people, a large choir and an organ take part.” [source]

Below: The entrance to the End of the World 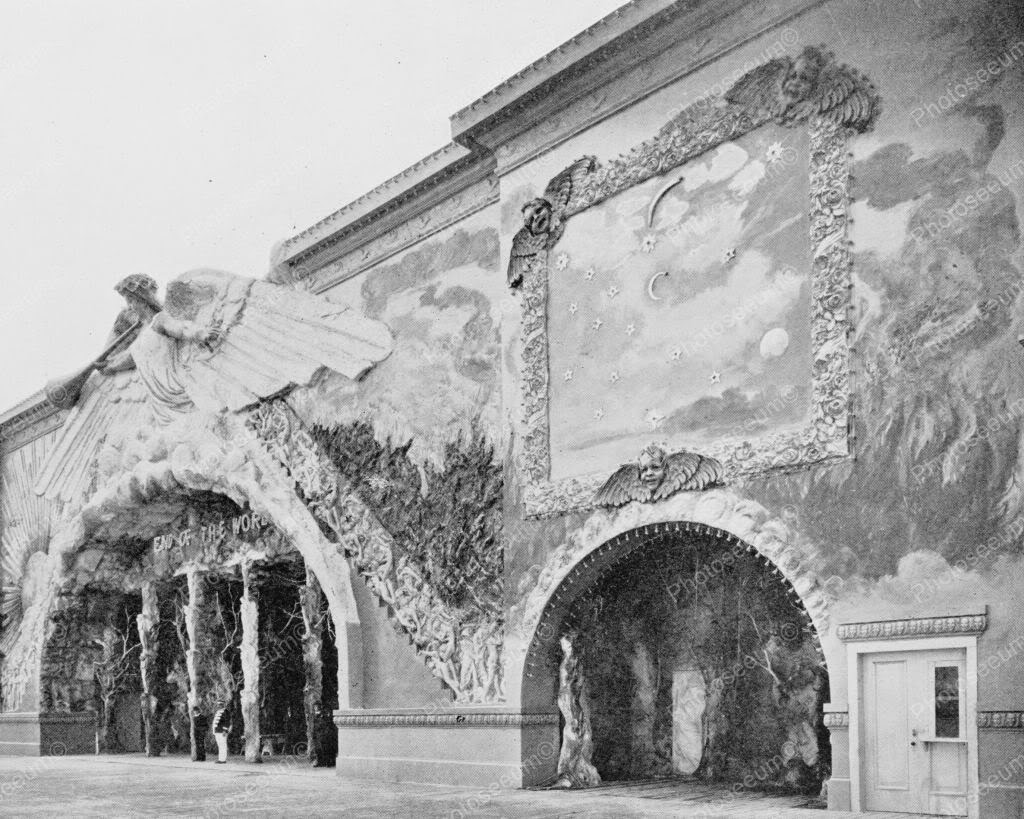 1 reply on “Coney Island’s many death and destruction amusements”

I love such posts about morbid reality. There was an exhibition of that photo genre at one of the hotels in New York I stayed at. We had to pay a cheap entrance fee, but it was really worth it.