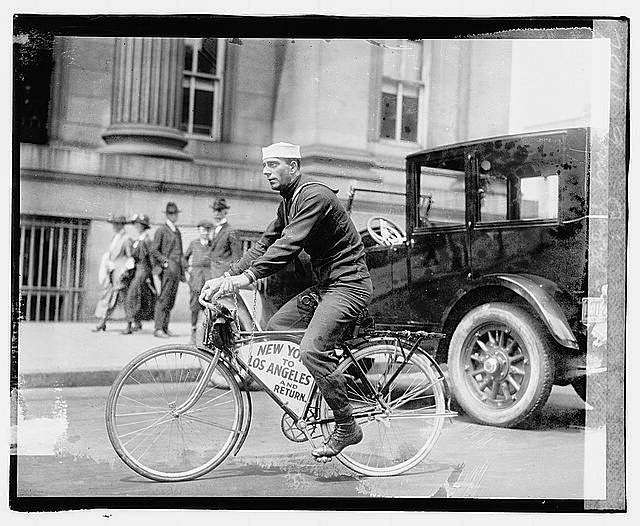 It’s Fleet Week!  The streets of New York are filled with hundreds of Marines and sailors who arrived yesterday in New York Harbor.  I’m pretty sure, however, that none of them hit the streets handcuffed to a bicycle.

That distinction goes to the enigmatic Tony Pizzo who, in 1919, rode his bicycle from Los Angeles to New York City.  And then, the following year, he rode it back again.

Pizzo set off from Los Angeles in grand style 95 years ago this week (May 21, 1919), joined by fellow sailor C.J. Devine who was attached to another bicycle.  The men were handcuffed to these specially designed bikes during a ceremony in Venice Beach by none other that Hollywood’s greatest star — Fatty Arbuckle.

Pizzo embarked on the trip as a dare from Arbuckle, who wagered the sailor $3,500 that he couldn’t make it to New York by November 1.  Why a military man was wiling away his time doing this in the months after World War I is beyond me.  (One press clipping describes him as “a discharged sailor.”)  In reality this was an elaborate advertising stunt.  One newspaper reports that “[t]he men were advertising the Fisk tire, Morrow brakes and Crown bicycles.”

“One can hardly realize the trouble that these two riders were put to,” remarked the League of American Wheelmen, “for they had to eat, drink, wash and take care of themselves generally while handcuffed to their wheels.”

The two men made their way across America, selling souvenir postcards to fund their cross-country journey.  Unfortunately, in Kansas, Devine was hit by a car, so Pizzo went the rest of the way alone.

He finally arrived in New York on October 30, greeted by guests at the Hotel McAlpin in Herald Square. He checked into a room still handcuffed to his bicycle and was only separated from the device a day later by Mayor John Hylan.

Pizzo “regarded his bicycle with dislike,” according to the New York Times. “[H]e would not do it again for one million dollars.”

But, in fact, he did do it again, re-chained to the same bike, riding back to Los Angeles the following year.  Fortunately, Devine had recovered from his injuries and accompanied Pizzo as his manager. 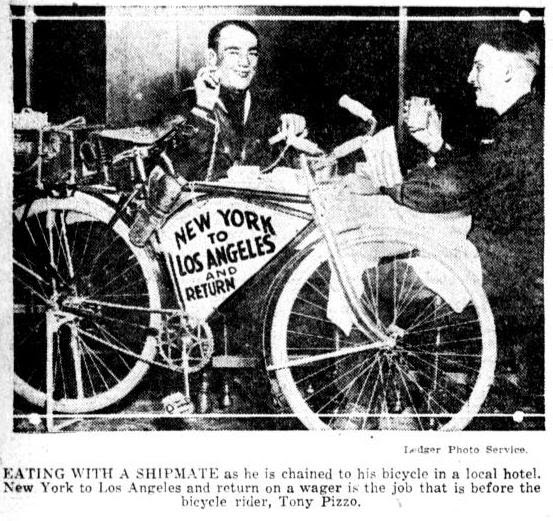 Apparently Pizzo just couldn’t stop biking.  In 1921, he embarked on another dare, the intent of which is indicated on his retooled bicycle below — to visit the governors of all 48 states. (picture courtesy Flickr/Zaz von Schwinn) 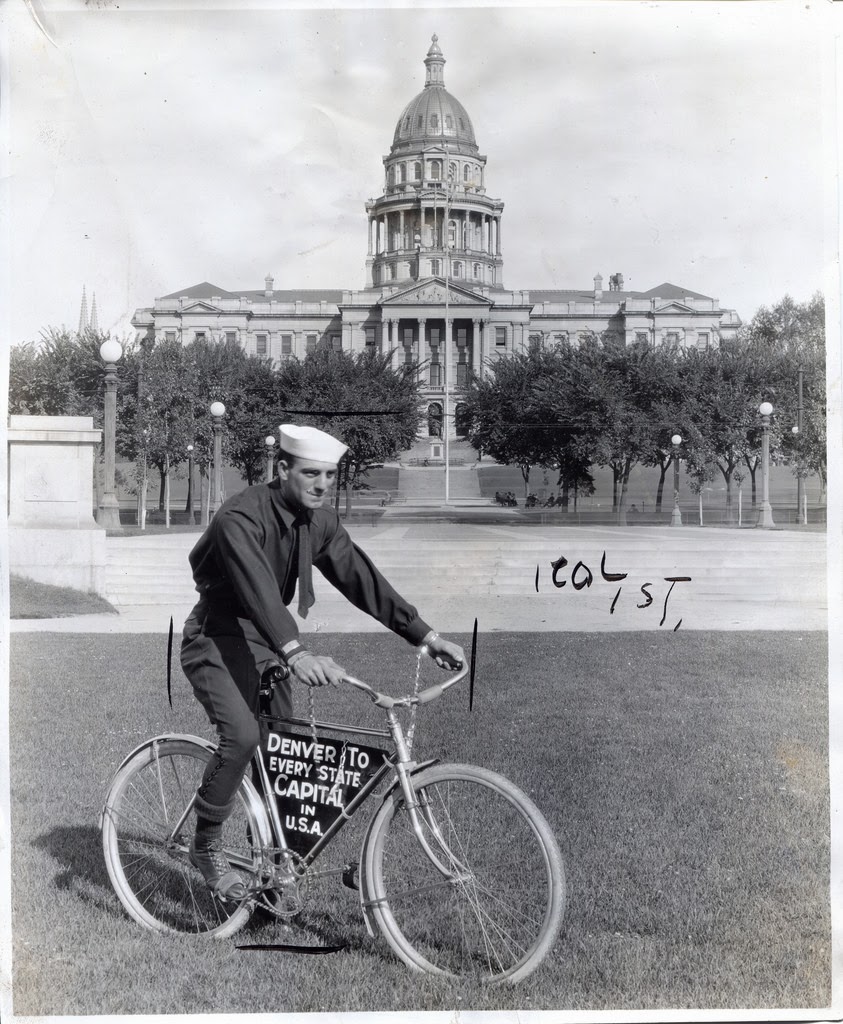 7 replies on “The adventures of Tony Pizzo, the sailor handcuffed to a bike”

He is my Great Grandfather. He was facing discharge due to possible tuberculosis. He did stunts to make extra money & save his job with the Navy. He was later tested again and found no tuberculosis so went on with a career in the Navy

Can I please ask when was his birthday

This is my Grandfather. He was facing discharge due to possible tuberculosis so did this for recruiting to save his job. He was later tested and reinstated with no tuberculosis

Hey Terry, I mau have written you before, but my name is Richard Peglow and I am the historian for the bicycle factory that made the first bike your grandfather rode in 1919, the Crown. I have some documentation on his journeys but would like to obtain as much as possible to his story/life. I am planning on writing a book down the road sometime about the bicycle factory and want to include Mr. Pizzo’s adventures. my phone is 3173312548 or crowncycles@att.net==thanks!

I am Tony’s granddaughter. Terry is a great grandson. For any further info, please contact me, as I had many talks with my grandfather.

hi Annette, happy 2023! I am looking forward to chatting with you regarding Tony’s many bicycle journeys, as I am devoting much of a chapter to him (in a book that will someday come to fruition) and others that have made journeys on Crown bicycles and others. contact me at; crowncycles@att.net 317/331/2548 Thank you!!

Annette, Richard here, my contact info is above. Would love to chat with you sometime about Tony. cheers, Richard