Fiorello Laguardia has his airport. James Duane has a drug store. Abram Hewitt is immortalized by the Cooper-Hewitt Museum. Robert Van Wyck has an expressway named after him.

But the former mayors of New York City are not always lionized in monuments or objects they would necessarily be proud of. Take John F. Hylan, the mayor of New York from 1918â€”1925. He may be the only mayor on planet Earth to have a gigantic hole named after him. Two holes, actually. 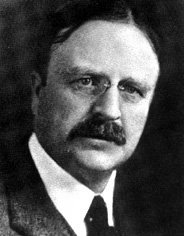 When Hylan stepped into the mayors seat in 1918, he brought the Democratic machine Tammany Hall back into city government after four years of Tammany-free leadership by idealistic ‘boy mayor’ John Purroy Mitchel. But Hylan would surprise many by devoting his two terms in office with a single-minded goal — the New York subway.

Hylan was a product of New York locomotive culture. Moving to Brooklyn from upstate New York at an early age, he became a train conductor with the Brooklyn Union Elevated Railroad (later the Brooklyn Rapid Transit Company, or BRT) which operated streetcars trains in Brooklyn and Queens, including the storied Coney Island trains, carrying thousands of passengers out to the beach each summer. Later the BRT would team with the early subway system of Manhattan’s Interborough Rapid Transit System to create a “dual contract” system of unregulated, privately-controlled transportation.

It should be noted that Hylan was fired from the train company after almost accidentally running down his supervisor. His bitterness towards the privately-owned BRT clearly fueled his later actions.

Hylan then became a lawyer and, after initially fighting the advances of Tammany Hall, eventually became one of their loyal candidates. His victory over Mitchel in the 1918 election was partially helped by the powerful William Randolph Hearst.

In the first year of Hylan’s term, a BRT train on the Brighton Beach line derailed at Malbone Street (today’s Empire Boulevard) near Prospect Park. The horrific accident (seen below) left 93 passengers dead and virtually destroyed the BRT system overnight. 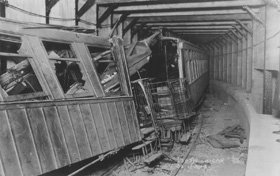 Meanwhile, the IRT was planning on raising its fares. Uniting the city required miles of more tracks, and it was leasing land from the city. So they decided it needed to bump up the astronomical five cents that customers currently paid.

Hylan had quite enough. Already an advocate against private interests, he often decried organized private power. Here’s an example of his wrath against private banking, a crusade that went unfulfilled: “The real menace of our Republic is the invisible government which like a giant octopus sprawls its slimy legs over our cities states and nation. At the head is a small group of banking houses generally referred to as ‘international bankers.'”

Of course, Hylan is one to speak; he was in Hearst’s back pocket throughout his entire tenure and never swayed from the calls of dear ole Tammany.

Hylan battled the train companies for most of his two terms. He was re-elected in 1921 by effectively thwarting the fare increase and creating a transit commission to refigure a transportation system under city control. By the end Hylan had effectively retooled New York’s transportation industry by creating his own city-run operation, christening the new Independent Subway System (ISS), in his last year of office, on March 14, 1925.

That November however he was swept out of office by Jimmy Walker, who would guide New York as one of its most powerful and influential leaders, leaving Hylan’s legacy virtually forgotten. Hylan died eleven years later of a heart attack. Four years after that, his dream was fully realized; the ISS merged with the other subway lines to create one complete city-run subway system.

But what about that hole? Well, Hylan had another bright idea: a tunnel between Brooklyn and Staten Island. The project began in 1923, with holes began on both sides of the Narrows, at Fort Wadsworth on the Staten side, and Bay Ridge on the Brooklyn side. The project, however, was abandoned. What remains on both sides is affectionately known as ‘Hylan’s Holes’.

The whereabouts of these abandoned holes, as far as I can tell however, remains a mystery.

So helpful for mayor studies! 🙂